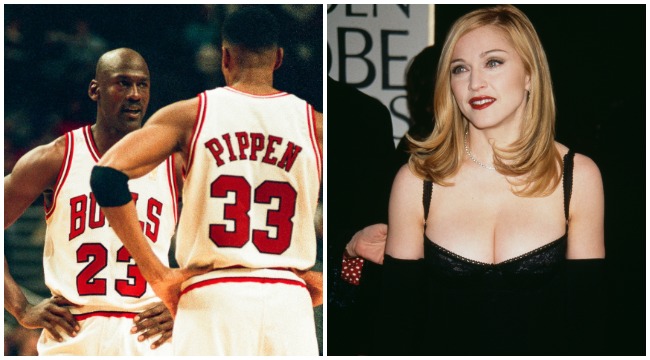 Michael Jordan has earned the reputation of being the most ruthlessly competitive athlete of all-time, consistently going to lengths that 10-out-of-10 psychiatrists would attribute to sociopaths.

There are stories of Jordan punching Steve Kerr in the face during a scrimmage, destroying Muggsy Bogues career with one line of trash talk, and cheating Scottie Pippen out of money by betting on pre-recorded races.

Where did this merciless competitiveness come from, you ask? The locker room showers.

Scottie Pippen reportedly has a baby arm. An absolute jackhammer. And Jordan was reminded of this for a decade, coming to a head (pun!) whenever the Bulls were in Los Angeles.

There was one other area that Pippen had Michael bested, and that was size of his equipment down below. Bulls assistant coach Johnny Bach said, “that killed Michael…you should have seen the girls Pippen had waiting for him everywhere he went.”

According to Bach, whenever the Bulls were in LA, Madonna would pick up Scottie in a limo complete with a hot tub.

Michael clearly did not like how Pippen got to spend “quality” time with the most famous woman on earth, and used to tell Madonna he could satisfy her better than Pippen to which Madonna apparently replied “not a chance.”

Further evidence of this: Scottie Pippen leaving the club with a group of women.