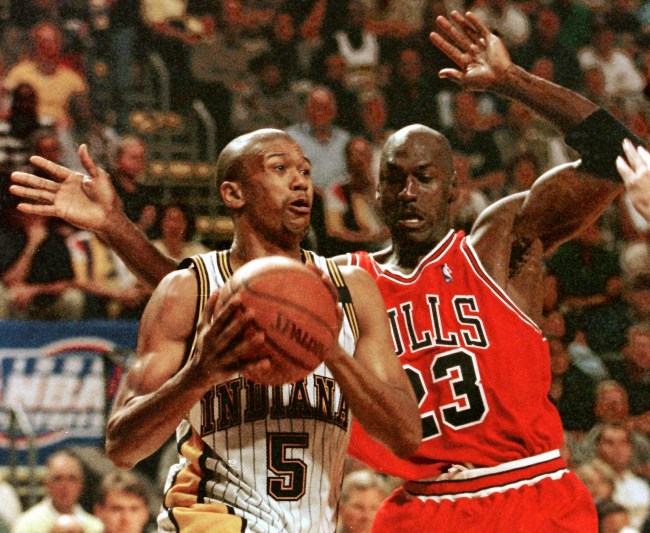 A rare game-worn Michael Jordan jersey is about to hit the auction block at Goldin Auctions and it is expected to fetch more than $500,000.

This particular game-worn jersey was worn by Jordan during the 1997-1998 Eastern Conference Finals when the Chicago Bulls faced off against Reggie Miller and the Indiana Pacers, a matchup that was featured prominently in The Last Dance. Michael wore this jersey in games 3 and 4 where he went off for 30 and 28 points but the Bulls still lost both of those games.

TMZ Sports was first to get wind of this historic jersey hitting the auction block:

Chicago ended up winning the series in a nail-biting 7 games … regarded as one of the toughest playoff series throughout the Bulls’ 6-championship run.

The super-rare jersey is about to hit the auction block at Goldin Auctions … and GA believes it will sell for around $500k!

“We expect this to set the all-time record for most valuable Jordan Jersey ever sold,” Ken Goldin tells TMZ Sports.

I’ve repeatedly said throughout the years here at BroBible that I’ve never been able to wrap my mind around why trading cards auction off for more than jerseys.

On the one hand, you have a physical piece of the game that was worn by the player and this artifact played some part in the outcome of a game. On the other hand, you’ve got a trading card that came out of a plastic wrapper and has sat preserved in a plastic case since day 1. I don’t get it.

Here are some Game 3 98 ECF highlights of Jordan wearing that jersey:

Goldin Auctions will be debuting a huge collection on June 22nd including rare Jordan sneakers that were worn in-game during his rookie season, jerseys, and other memorabilia. You can follow that link to the Goldin Auctions website where they have detailed information on current lots and the one that drops on the 22nd.