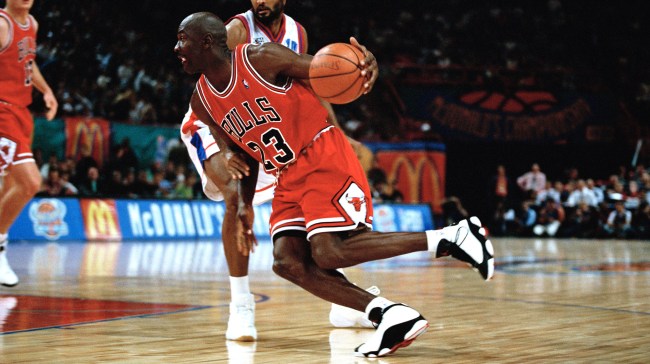 Several gifts given by Michael Jordan to John Michael Wozniak, the permed security guard who went viral after his appearance in The Last Dance.

Wozniak, an ex-cop who became one of Michael Jordan’s personal security guards, passed away in January, three months before The Last Dance aired on ESPN+.

He beat MJ in a game that he probably made up (we need to know the name of this game) and then he does the “MJ shrug”. What a legend#TheLastDance pic.twitter.com/2mDqKSbaUr

Among the items up for bid at auction house Lelands are a Rolex Jordan gave to Wozniak for Christmas in 1993 inscribed “To John M, From MJ, 12-25-93.”

Also in the auction are a diamond-studded ring that Jordan gave to Wozniak and others in his inner circle in 1998 to celebrate his sixth NBA championship, and a Wizards jersey that Jordan wore in 2002 during his two-season stint with the team. The bidding on the jersey is already up to $6,000, with a month still to go on the block.

In a separate auction, a collection of game-worn Michael Jordan gear owned by MJ’s assistant and longtime friend George Koehler (who also appeared in The Last Dance) is expected to fetch over $1 million.

1984: George Koehler went to the airport to pick up a passenger who never showed up. A guy named Michael Jordan just got off the plane & needed a ride. George charged him $30 & has been by his side ever since 💯 #TheLastDance

Bidding on most of this collection will begin on Nov. 23, with the final game jersey auction being held in January 2021.