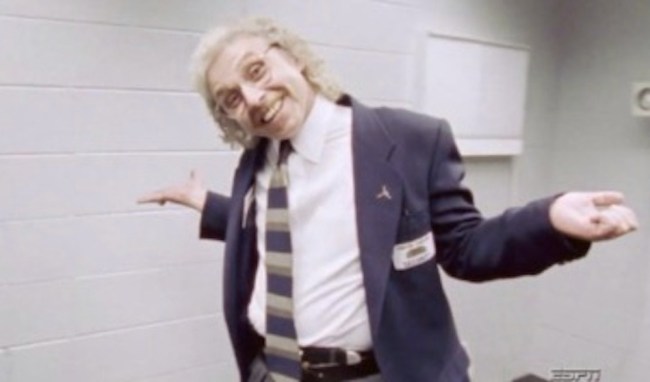 There’s been no shortage of awesome stories to come out of The Last Dance that have helped the series overtake Tiger King as the most popular documentary in the world right now, and while Michael Jordan is obviously at the center of most of them, it’s also shined the spotlight on some other figures that were in his orbit over the course of his career.

Last week, everyone was suddenly reminded about the existence of Carmen Electra when she recalled the time she hid from MJ when he stormed into Dennis Rodman’s hotel room in search of his teammate, but on the most recent batch of episodes, an unlikely star emerged in the form of the mulleted security guard who won $20 by managing to land a quarter closer to the wall than His Airness could and celebrated his achievement with a shrug to end all shrugs.

He got the opportunity to work with MJ when he worked for the narcotics division of the Chicago Police Dept. in 1970.

And now, the world knows him for dethroning MJ in a quarter toss.
pic.twitter.com/54PLLVm6kQ

John Wozniak managed to achieve a level of sheer and effortless swagger over the course of that 27-second clip that most people never will no matter how hard they try. However, it turns out that’s only the tip of the iceberg, as that was just one of the many enviable anecdotes he earned the right to be able to tell during the years he spent protecting the basketball legend.

Wozniak was an Army veteran who joined the Chicago Police Department in 1970 and was working as a narcotics officer when he was presented with the chance to join Jordan’s private security detail after he joined the Bulls. This kicked off one hell of an adventure that he discussed with Complex in 2016 after achieving his first taste of internet fame courtesy of a picture of him and the rest of the crew flanking MJ as he stepped out of his Ferrari prior to a playoff game.

Security guards crowd around Michael Jordan as he gets out of his Ferrari to enter Chicago Stadium in May 1992. (John Biever for Sports Illustrated) pic.twitter.com/i7NzTGHFah

Wozniak was constantly at Jordan’s side as he evolved into one of the most famous people on the planet and says one of the most memorable aspects of the job was watching the city he played for undergo a similar transformation:

“When I had first joined the Chicago Police Department, I was assigned to the Monroe Street 12th Police District. During that time, you really couldn’t walk down Madison Street. When Michael Jordan came to Chicago and brought this winning attitude and charm, the next thing you know, banks, restaurants, and condominiums started opening up.”

Wozniak—who passed away in January—said the job brought him to various events all over the world and provided him with plenty of surreal experiences. In addition to getting a Jumpman tattoo with MJ and his fellow bodyguards, he once appeared onscreen alongside him in an unspecified movie for a couple of minutes, and at the premiere, he said Jordan jokingly told him, “That’s your claim to fame. That’s all you’re gonna get.”