Fans Are Having Fun With Images Of Michael Jordan Getting Handsy With Mary J. Blige At The All-Star Game 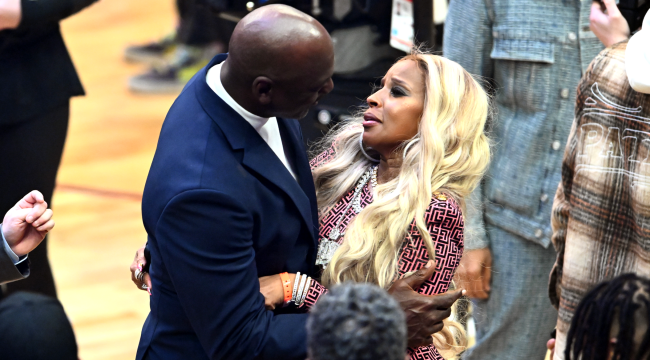 NBA legend Michael Jordan made a surprise appearance at the All-Star Game Sunday night after watching his NASCAR driver Bubba Wallace finish second in the Daytona 500.

Jordan was on hand as part of the NBA’s 75th anniversary team celebration during halftime of the game, drawing cheers from the fans even louder than that of hometown boy LeBron James.

And while things may have gotten a little awkward when His Airness and his frenemy Charles Barkley crossed paths Sunday night, there was no such issue when MJ ran into another old friend Mary J. Blige.

Blige, fresh off her performance with Dr. Dre, Eminem, 50 Cent, Kendrick Lamar, and Snoop Dogg at the Super Bowl halftime show, received congratulations from the Charlotte Hornets owner for a job well done.

Jordan also expressed his admiration for Mary J. Blige with a hug and a little pat on the behind.

Fun Fact: Michael Jordan appeared in Mary J. Blige’s video for Give Me You

While yes, patting someone on the rear end is a staple of all athletes, fans couldn’t help but also notice that when Jordan, Vanessa Bryant and Blige posed for a photo together at the game, MJ’s hands were still wandering a bit. (Not that she seemed to mind, sharing the photo on her Instagram.)

The 59-year-old Jordan is currently married to model Yvette Prieto. Blige is currently single after divorcing her husband of almost 15 years in 2018.

Naturally, NBA fans could not let something like this slide, even if it was just a friendly, innocent gesture, without offering up some of the internet’s trademarks commentary.

I guess Tyrese ain’t got that MJ bread… 👀 pic.twitter.com/coLuugHGfa

Mike was this getting off that plane from the Daytona 500 pic.twitter.com/McFkBTJIfq

Yall don't remember the rumors from the 90s that Real Love was about Michael Jordan?

As tall as he is, how his hand get all the way down there?

He was on demon time pic.twitter.com/epMm1A4a92

Even LeBron James got sideswiped in the comments.

MJ wasn’t the only one that saw that ass 😏😂 pic.twitter.com/bfu3XnxC4V