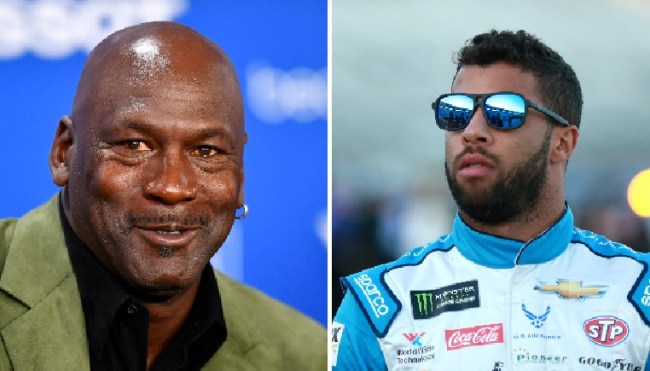 Michael Jordan is entering the NASCAR game and has made two big signings right out of the game.

According to various reports Jordan has signed Bubba Wallace and Denny Hamlin to his new team that will debut during the 2021 NASCAR Cup Series Season.

NBA icon Michael Jordan is starting a NASCAR team with Denny Hamlin and his first driver is Bubba Wallace.

Jordan, widely considered to be the greatest basketball player of all time and current owner of the NBA’s Charlotte Hornets, is now the majority owner of a NASCAR Cup Series team. Wallace, the series’ lone Black driver in the midst of a career-best season, has found a home after announcing earlier this month that he would not return to Richard Petty Motorsports.

Jordan has attended several NASCAR races over the years, most recently the 2019 finale at Homestead-Miami Speedway when Hamlin was in the Championship 4 and competing for his first championship.

“I’m a big race fan,” Jordan told NBC’s Dale Earnhardt Jr., who did the interview. “Started off when I was a kid and I grew up watching (Dale Earnhardt), Richard Petty … Cale Yarborough was an original 11 that I remember. Now I’m good friends with Denny Hamlin and we go way back. … I’m a big NASCAR fan, so I came out to support him.”

Update: Both Wallace and Hamlin have released a statement about their move.

Tonight, I’m excited to announce MJ and I are starting a new, single car @NASCAR Cup Series team for 2021. Deciding on a driver was easy – it had to be @BubbaWallace. pic.twitter.com/nIJv0X6ZOX

This is a unique, once-in-a-lifetime opportunity that I believe is a great fit for me at this point in my career. I’m grateful and humbled that they believe in me and I’m super pumped to begin this adventure with them.