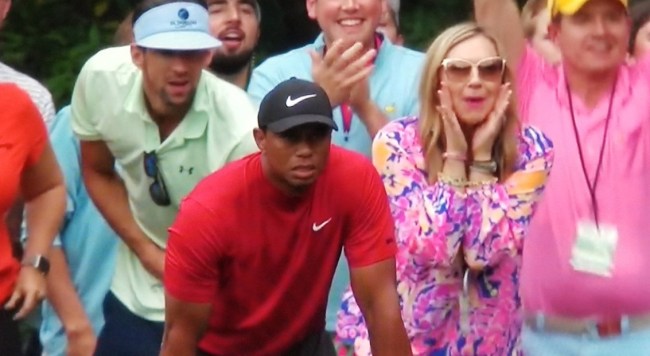 On Sunday, 43-year-old Tiger Woods recaptured some of that laser-like focus that led him to win 14 majors between 1997 and 2008 to take home his fifth Masters victory, and first major win in 11 years.

The win moved Woods to within three major wins of the all time record held by Jack Nicklaus, leading The Golden Bear to admit he’s once again looking over his shoulder.

"He’s got me shaking in my boots."@jacknicklaus joined Live From to discuss Tiger's 15th major victory at #TheMasters: https://t.co/oIM6U2CLLz pic.twitter.com/665ecE3IgF

So why did Nicklaus think, after an 11 year drought that Woods still had more major wins in him?

“I’ve been saying – everybody kept asking me, ‘What about Tiger? Can he win another major?’ I kept saying, ‘I think so. I think he will,’” Nicklaus said. “And the reason I said that is because it all depended on Tiger’s health. If Tiger is healthy, he didn’t need to worry about his driver. He never drove the ball straight anyway. He always, from somewhere, he got the ball up around the green. He’s such a great putter, he has such a great short game, he has such distance control with his irons – unbelievable distance control, the best I’ve ever seen of anybody in the game.

“If you get a guy who can do that, even if Tiger wasn’t healthy, if he could bunt the ball off the tee somewhere, with his iron game and his short game, he’s going to win again. And he topped it off this week, by driving the ball with it.”

Tiger’s fifth Masters win now moves him within one of Nicklaus’ record six green jackets (even though he and Tiger have really only been given just one by Augusta National).

Another famous and highly-decorated athlete (GOAT, if you will) who also showed laser-like focus on Sunday in Augusta was 23-time gold medal winner Michael Phelps, who knows a little something about redemption stories and has become something of a regular at PGA events of late.

Embed from Getty Images
Phelps, as you may recall, during the 2016 Olympics in Rio blew up the internet with the “death stare” he gave while waiting to compete – something he channeled on Sunday as he watched Woods’ tee shot on the 16th hole, once again sending the internet racing to comment and create new memes.

Tiger Woods and Michael Phelps trying to Jedi mind trick a hole in one
pic.twitter.com/oiTDlEnuSS

Michael Phelps wanted that to go in almost as badly as Tiger did pic.twitter.com/eQtkn4E0zp

100% chance Michael Phelps is taking shortcuts through the water hazards to get these spots. #TheMasters pic.twitter.com/xOIJwa9eQ1

Michael Phelps is just a locked in as Tiger pic.twitter.com/1eYCPtph8a

Michael Phelps behind Tiger on 16th. Amount of big dick energy is through the roof

Michael Phelps is all of us right now pic.twitter.com/STq3pAZKW8

Get you someone that's as focused as Michael Phelps was for Tiger Woods … pic.twitter.com/i1Vmt0JTxk

You know you’re the GOAT when you have the best Olympian of All Time leading your gallery on a Sunday and cheering intensely like a normal patron. Michael Phelps is team Tiger Woods too. 🐅 🐯 #TheMasters pic.twitter.com/LSGtVfwRRb