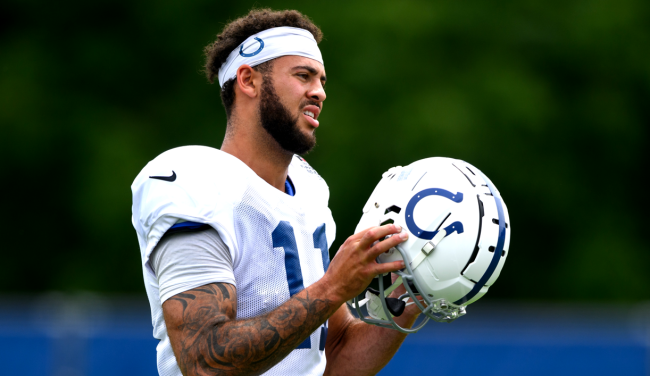 Michael Pittman Jr. threw some not-so-subtle shade at former Colts quarterback Carson Wentz when talking about what its been like working with Matt Ryan so far this season.

After being selected by the Colts in the second round of the 2020 NFL Draft out of USC, Pittman has spent two seasons with two different quarterbacks throwing him the ball.

In his rookie season, with now retired Philip Rivers at the helm, Pittman only started eight games and caught just 40 passes for 503 yards and one touchdown.

Pittman spent his sophomore NFL season with Carson Wentz under center and saw his numbers drastically increase to 88 receptions for 1,082 yards and six touchdowns while starting all 17 games.

However, while his numbers went up, there was still a lot of frustration.

Wentz, who the Colts traded a 2021 third-round pick and a 2022 first-round pick to the Eagles to acquire, never seemed comfortable during his one year with the Colts. He ended up being traded after just one season to the Washington Commanders for 2022 second and third round picks and a conditional third-round pick in the 2023 NFL Draft.

The Colts then went out and traded a third-round pick in the 2022 NFL Draft to the Atlanta Falcons to acquire 2016 NFL MVP Matt Ryan.

This week, Pittman discussed the difference so far this season with the 37-year-old veteran QB versus last year with Carson Wentz.

“Last year, we were out there, running the plays, but we were basically just playing football,” Pittman told The Athletic. “I mean, we would just run around and make plays … this year, we’re trying to be organized, be at our spots and at our depths, because that’s how Matt likes it and how he commands it and that’s what he expects. So you better be there.”

Michael Pittman Hr. isn’t alone when it comes to feeling a positive difference between Ryan and Wentz

“His presence settles everybody,” Reich said about the former Falcons star. “Listen, every guy is focused, every guy is all business, but Matt is just at another level. He’s out here to work.”

“You can feel it,” said Colts general manager Chris Ballard. “He’s got an urgency and he’s got an expectation, not only from himself, but for others. It’s hard to demand much of others if you’re not putting it out there yourself — which he does.”

If nothing else, the addition of Matt Ryan is a change from what Colts owner Jim Irsay called “a mistake” at the league meetings in March, referring to acquiring Wentz last season.

Whether it actually ends up being a positive change remains to be seen.

“With Peyton and Andrew, you knew what you were getting,” Irsay told The Athletic. “But this is a different time and place.”