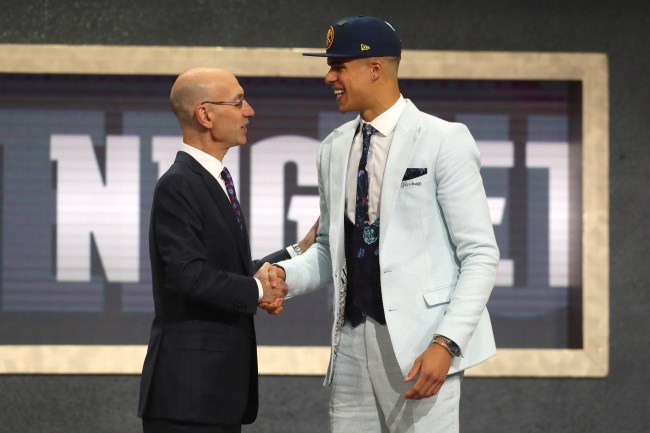 Michael Porter Jr. might want to think twice before hitting the “Send” button on his phone. That’s because, while in attendance at this year’s NBA Rookie Symposium — even though Porter Jr. was drafted by the Denver Nuggets in the 2018 NBA Draft — the small forward made a little mistake that was more than embarrassing.

That’s because, while trying to engage with his Snapchat fans, Michael Porter Jr. accidentally shared NBA Commissioner Adam Silver‘s cell phone, office phone and email, prompting fans who saw the post before the player deleted it to test out the digits. Take a look at what one person posted onto Twitter after given the number from Porter Jr.’s Snapchat prior to it being removed.

HE JUST RESPONDED TO ME LMAOOOO pic.twitter.com/dEGFQU8AxX

Pretty funny that Adam Silver even took the time to reply to the unsolicited text, which only goes to prove what we already knew — that he’s the coolest commissioner in all of sports. Don’t think for a second that Roger Goodell would be taking the time to respond to some random number.

Needless to say, given the response from people on Twitter after Michael Porter Jr. posted the image on Snapchat, the second-year Nuggets player didn’t seem to remove it quick enough, because lots of people had reactions upon seeing it. Take a look below at some of what social media had to say.

Michael Porter Jr walking into his meeting with Adam Silver after leaking his personal phone number to the whole internet
pic.twitter.com/exE5BadQww

It’s unfortunate that Michael Porter Jr. was the player who leaked Adam Silver’s personal info because, well, the NBA hasn’t been kind to the kid since he entered the league last summer. Not only did he slide down draft boards in 2018 because of a back injury that needed surgery — which led to him being available at No. 14 for the Nuggets to snag — but he also suffered a minor knee injury during Summer League this year, which set him back a little bit. Oh, well, it’s only up from here for him… I hope.

Here’s to hoping Porter Jr. learns to keep his phone down during important times like this, because Adam Silver might be cool, but he won’t be so happy if this sort of thing happens again.