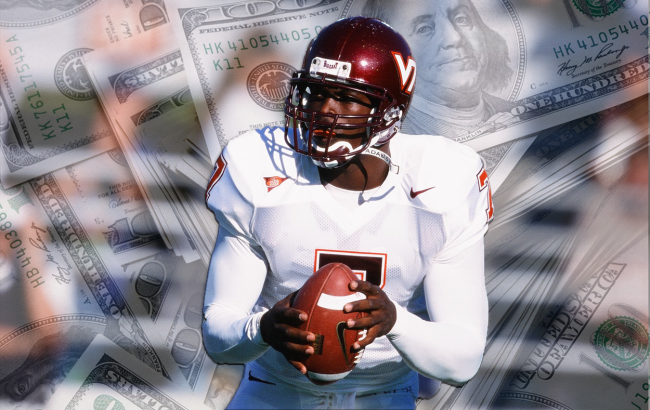 Michael Vick was the No. 1 overall NFL Draft pick in 2001 and for good reason. However, if he was able to have been compensated for his Name, Image and Likeness, that may not have been the case.

The 1999 First-Team All-American recently spoke about NIL and the current climate of college football and raised a lot of “what if” questions. Vick’s college highlights speak for themselves, but there may have been a hypothetical situation in which he finished out his fourth and fifth year at Virginia Tech.

During an appearance on The Rich Eisen Show, Vick estimated the amount of money he could have made through NIL deals. He thinks it would have been a large sum.

Specifically, as he and Eisen put it, they believe that it would have had the same number of digits as the amount of letters found in the word ‘dynamic’ — seven.

As for the impact the Name, Image and Likeness may have had on Vick, he thinks that it might have extended his career in Blacksburg.

“I definitely think it would have been some dynamic numbers,” said Vick. “It definitely would have been enough to keep me around in school. I wasn’t the guy who wanted to leave early, but because of circumstances, in my life, I felt like I was forced to leave early. But I wanted to enjoy that college experience. I felt like I was just growing into my own, grown into a man and then just didn’t want to make life super serious. But sometimes young men gotta make adult decisions and that was a decision I made at the time. I would have bloomed in the NIL space. And I know it would have been done the right way.”

But that also raises some interesting questions. If Vick would not have settled for less than one million dollars, could Virginia Tech have gotten him that number?

Surely, Hokie boosters would have found a way to keep their star quarterback in Virginia, especially after back-to-back one-loss seasons. However, what if they couldn’t?

Would Vick have transferred? Would he have been lured to a USC, Texas or Miami with a larger offer than his one in Blacksburg?

This same conversation can be had about a lot of the premier college athletes in the pre-NIL era. It’s all hypothetical, but it’s all very interesting to think about.