Michigan Man Spends $10,000 To Build Wiffle Ball ‘Field Of Dreams’ In His Backyard 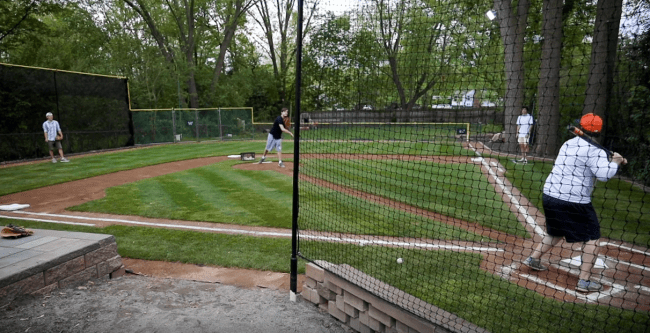 Located in Plymouth, Michigan, Zajdel Park is the fulfillment of one man’s baseball dreams (and secretly many others).

What began with a makeshift pitching mound in his parents’ backyard, has since been transformed by Eddie Zajdel into one of the nicest (Wiffle) ballparks in the country.

“The field started off with just a mound of dirt that I put in the middle of the backyard,” Kajdel tells USA Today. “My parents weren’t too enthusiastic about that, but they saw just how much enjoyment me and my friends were getting out of that. And because of that, it kind of took on a life of its own.”

Kajdel says that summer after summer he added and upgraded his Wiffle ball park. First, he created the mound. The next summer it was the infield. The summer after that it was the fence. After awhile people started donating to his cause, including sod and dirt.

Today, Kajdel says, “The grass in the field is a special blend of Kentucky bluegrass that’s used by many different MLB stadiums. We laser-leveled it, we installed lights, we installed a brand-new fence.”

He says he is always tinkering with the field. Much like a real ballpark, “there’s always something to work on,” he says.

“Some nights when we’re out here sitting by the fire and the lights are on or when I see other people enjoying the field, it finally hits me,” says Kajdel. “It’s like, ‘Wow, this is actually pretty cool.’”

So is the fact that now that Eddie Zajdel is in his early twenties he wants to use the beautiful Wiffle ball field to give back with a fundraiser for kids in need.

“If I could turn something like this, you know, something in my backyard into a greater cause, that would make me very happy,” says Zajdel. “My goal is to share it with as many people as possible.”