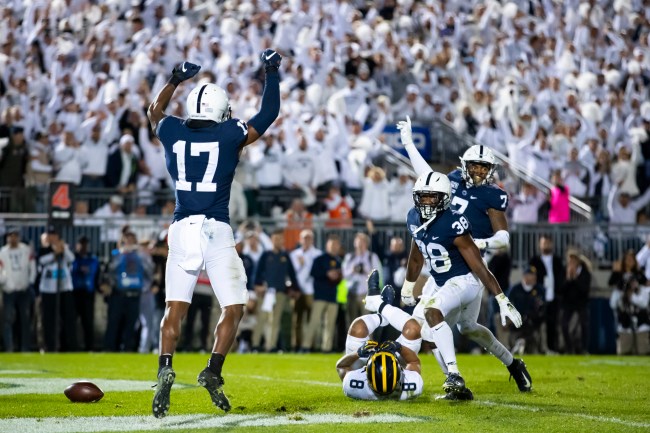 On fourth-and-goal at Penn State’s three-yard line with two minutes to go in the game, the sophomore wide receiver let what would have been a game-tying touchdown pass from Shea Patterson pass slip through his fingers, extinguishing the Wolverines shot at handing Penn State its first loss of the season.

Michigan WR Ronnie Bell lets the game pass between his hands on this 4th-down incompletion with 2 minutes left #MICHvPSU pic.twitter.com/qtrF27sYxU

Bell, who caught four passes for 71 yards, could not contain his disappointment on the sidelines as the waning moments of the 28-21 loss passed by.

I became a lifelong fan of Ronnie Bell after seeing how much this guy cares – his emotions all anyone needs to know how much a Michigan man he is #8 pic.twitter.com/PdyQcghXmU

If sobbing on the sidelines on national television isn’t enough of an indicator of Bell’s emotional state, Michigan “fans” sending hate mail to Bell’s dad couldn’t have done much to lift his spirits.

Connor Grady, whose email signature claims he’s a recent graduate, allegedly wrote the following to Bell, which was then posted to Twitter by his father, Aaron.

“Please quit the team already. Utterly sad that my tuition goes to paying for the scholarship for such a scrub ass player like you. Bum ass. Go play basketball somewhere. Please do us all a favor and never play football again.”

To the so called @UMichFootball “fans” (Vocal minority) bashing Ronnie Bell. Kid plays for “your” team..battles his ass off ALL night..has an unfortunate drop late and you decide to crush him??? What the hell is WRONG WITH YOU?
Unfortunate aspect of twitter-gives idiots a voice!

He even digitally murdered a man!

Yet your dumbass follows me. #BeatIt https://t.co/G09MCgOMzU

Imagine being so hollow a person that you take it upon yourself to email someone on the worst day of his athletic career to tell him he sucks moments after you witnessed him balling his eyes out on the sideline. Can someone identify this douchebag so the world can run his undies up the flagpole.

Ronnie Bell was in tears after the game. Ronnie put his heart and soul into the game today and Michigan nation should be nothing but proud of him. pic.twitter.com/teTC9QYKAU