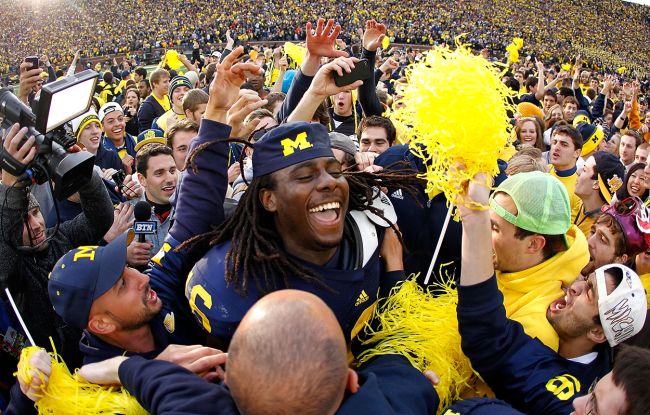 If you were a college football fan in the late 2000s and early 2010s, then you are well aware of how much fun it was to watch Denard Robinson. And of the people who watched college football during that time period, many of them are the same high school recruits who are deciding on where to play their college ball.

According to multiple sources, the Wolverines are set to hire Robinson as their newest assistant director of player personnel. He will be directly involved with recruiting the teenagers who first fell in love with the game while he was tearing it up in Ann Arbor.

To make the move even more justified, for lack of better word, this isn’t Robinson’s first rodeo as a coach. After playing three years in the NFL with the Jaguars, he joined Jacksonville’s staff in 2019 and spent two years as an analyst and quality control coach.

And, of course, Robinson is a legend at Michigan.

In his four-year career, the man they call Shoelace (because he plays with his shoes untied) led the Wolverines to a Sugar Bowl and racked up an absurd amount of yardage. He ranks third, fourth, fifth, sixth, seventh, eighth, ninth and tenth in single-game total yardage at Michigan, had the first and third highest single-season total offensive seasons at Michigan and has four of the top-five most single-game rushing totals in Big Ten history.

TLDR: Robinson was nearly impossible to stop when he had the ball in his hands.

Now, after almost ten years away from the program, he is returning home. Robinson will be looking to bring the next, well, him, back to Ann Arbor to play for Jim Harbaugh and is destined to become a rising star in the field.