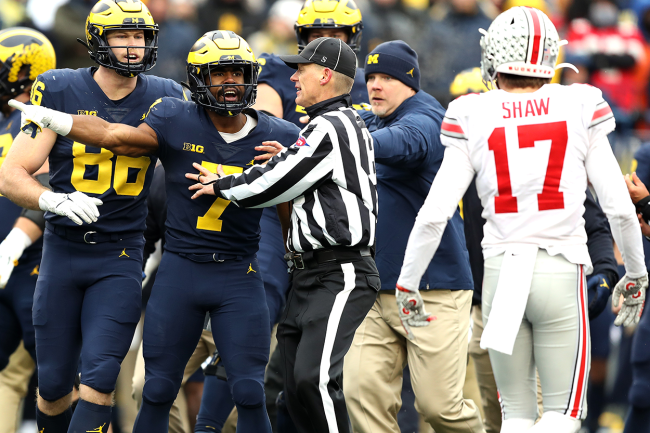 College football is a totally normal sport. Don’t let anyone tell you otherwise.

Over the weekend, Michigan football proved that Ohio State lives rent-free in their heads during a recruiting camp. It’s hilarious.

Throughout the summer, college football programs around the country hold camps for high schoolers, and sometimes even middle schoolers. While the camp cycle serves as a (very) small revenue generator, it is primarily an opportunity for publicity— on both sides.

Schools can showcase their campus, facilities and coaching staff. Prospects can get better as players while showcasing their talent.

On the flip side, the programs try to do anything that they can to standout over their conference and FBS/FCS counterparts. Michigan certainly tried to do exactly that over the weekend.

According to On3 Sports’ EJ Holland, the Wolverines pulled a junk car onto the field that closely resembled Ohio State’s helmets. The Buckeyes, of course, are known for their helmet stickers, which translated to the silver vehicle.

From there, the prospects were given the chance to beat up the car.

This Ohio State junk car was apparently pushed around and beaten up by prospects at today's Michigan camp #GoBlue 👀👀👀 pic.twitter.com/gq0uEzhqzL

Now, this is certainly a way to stand out. But, at the same time, is it not the perfect example of Ohio State owning free real estate in the minds of those at Michigan? Maybe just a little bit of little brother syndrome?