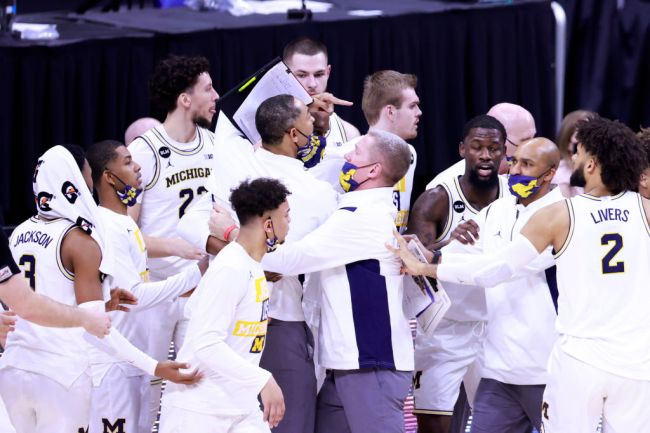 Ah yes, the long-standing, deep-rooted rivalry between Michigan and… Maryland? Things got chippy in the second half of the Big Ten Tournament quarterfinal between the Wolverines and the Terrapins and the No. 1 seed’s head coach was at the center of it all. As the game went to timeout, Juwan Howard had enough of whatever was being said on the court and had some words of his own for opposing head coach Mark Turgeon. The two went back and forth for few moments and then something Turgeon said sent Howard into a fit and he started charging at the Maryland bench.

It isn’t clear what exactly was said between the coaches, but Howard was pointing to his head as the game went to break, telling his players to use their heads to avoid any issues as the trash talk escalated. Those in attendance believe that they heard Turgeon tell Howard “don’t hang the banner because your banners come down” in reference to Michigan’s 2020-21 Big Ten regular season title and the school’s previous recruiting scandal. A former booster violated NCAA rules during recruiting in the 1990s, which resulted in forfeited titles during that era. That is not confirmed.

After the game, Turgeon said that what he said was “don’t talk to me” and said that the two teams had gotten chippy in the previous meetings between the two teams. It appears that Howard tells Turgeon “I’ll f**k you up, b**ch.”

If he had reached his opponent, Turgeon wouldn’t have stood a chance.

The 19-year NBA veteran was given a double technical foul and tossed from the contest, but it didn’t matter. Michigan went on a 17-4 run to close things out and advance to the conference semifinals against the winner of Purdue and Ohio State on Saturday afternoon. He spoke to the press after the game:

Michigan head coach Juwan Howard says that Mark Turgeon "charged at him" and that he acted in defense.

"I was raised by my grandmother and also by Chicago… When guys charge you, it's time to defend yourself." — Juwan Howard

It is unclear as to whether Howard will be allowed on the floor for the rivalry game.