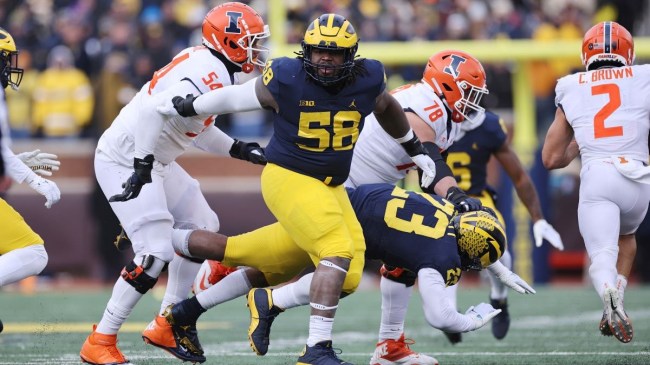 The University of Michigan football program is riding high these days. The Wolverines just beat Ohio State for the second year running, the first time in over two decades that has happened. They’re 12-0 and ranked No. 2 in the country headed into the Big 10 Championship game. It appears they’re headed for their second consecutive College Football Playoff appearance and they look every bit a threat to win their first national championship since 1997.

But things got a bit murkier for Michigan on Thursday.

The Detroit News reported Monday morning that star defensive tackle Mazi Smith was charged with a felony for illegally carrying a concealed weapon. Smith, a senior. made 43 tackles for the Wolverines, including 2.5 for loss.

But that’s just where things begin to get interesting.

The report states the incident occurred on Oct. 7. But he wasn’t charged until nearly two months later. The Washtenaw County Prosecutor’s Office is responsible for levying the charges. The same office took just three weeks to charge seven Michigan State players following a fight with the Wolverines after their rivalry game on Oct. 29.

A number of fans seemed confused about the differences.

Michigan coach Jim Harbaugh was adamant that Michigan State players should face “serious criminal charges.” Though Harbaugh has not yet commented Smith’s incident, which took place weeks prior.

Fans are struggling to work out why charges against the Spartans came so much more swiftly.

It took less than a month for the Washtenaw County Prosecutor's Office to issue charges to seven MSU players following the tunnel incident. It sat on the Mazi Smith charges for nearly seven weeks.

Waiting for explanation from the prosecutor and Michigan football. https://t.co/GuvoZBTOcp

UM football program is a pile of hypocrisy https://t.co/uWraNl6mYY

Oh that's not a good look for the morally sound James Joseph Harbaugh.

I was told he's a man of great character! https://t.co/fCth7MfZ7P

I’m not saying it was prosecutorial misconduct, but you’re certainly free to draw that conclusion if you want to, based on the facts of the case… https://t.co/4wSeUOf5W1

They also discovered some interesting from the prosecutor’s office to the University of Michigan.

Amazing. The prosecutor grew up in Ann Arbor, graduated from Michigan Law, is on the faculty, and "Go Blue". lol https://t.co/d4x2gkazwe pic.twitter.com/vvcUypwuYz

Though Wolverines fans quickly rushed to the defense of both the school and the prosecutor’s office.

The Spartan grievance machine needs to sit this one out. Whatever the incident on 10/7, it clearly wasn't an assault under a barrage of cameras after a nationally televised event. https://t.co/sSBfYxE31t

Explanation: Video proof of assault and battery, waiting for more details on his license (won’t face a felony charge) was it really that difficult? https://t.co/PLmyBqsza6

Harbaugh will speak with media members ahead of Saturday’s Big Ten Championship Game against Purdue. Odds are, they will ask him about the Smith incident. And his answer could be very telling.