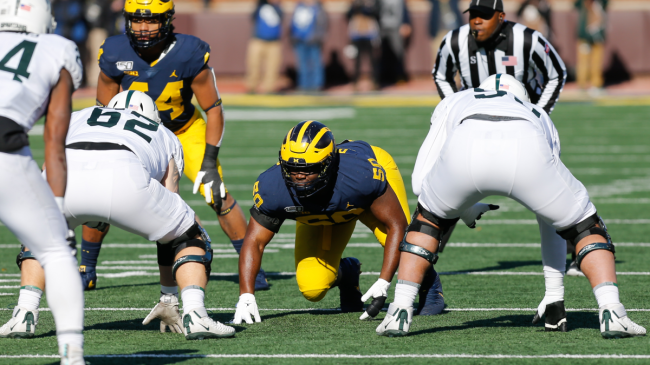 It’s rivalry week in Michigan with the Wolverines taking on the hated Spartans in just 12 days. Both teams have a bye week this Saturday before the annual matchup.

This will be the 97th meeting between the two programs, whose campuses reside just 65 miles apart. Michigan leads the all-time series 56-36-4, but State has won each of the last two contests and 10 of the last 14.

This year, the Wolverines rank among the nation’s top four teams. They’re hoping to both avenge last year’s loss to Sparty and get back to the College Football Playoff. Michigan State, meanwhile, has struggled but a win in this game could change the trajectory of the season.

On Monday, it was announced that the showdown would be aired in primetime, setting up for a 7:30 PM kickoff in Ann Arbor. It will be just the second night game in the rivalry’s history. Michigan State’s social media team quickly drafted a graphic to note the kick time, but that post has since been removed.

Wolverine fans trolled the Spartans into deleting the failed attempt at a rivalry jab.

State’s tweet showed the Michigan logo upside down, which was meant to signal that the Wolverines are in danger or distress ahead of the matchup. Unfortunately, when you turn an ‘M’ upside down, it turns into a ‘W.’

So Michigan State football tweeted this graphic with the upside-down “M,” got made fun of for giving Michigan the “W,” and has already deleted the tweet.

We’re off to a great start on rivalry week(s)! pic.twitter.com/VDuolZmckd

There were so many Michigan fans replying in the comments section that the account took the graphic down. Wolverines were joking that the Spartans had already conceded the game despite it being nearly two weeks away.

Not the best start to the rivalry leadup.

But in reality, gives Michigan the W.

Michigan State will try to bounce back from this early L and land a win where it matters most. On the field.

Michigan fans don’t seem worried, and they’ll hope to keep their playoff dreams alive with a victory over their hated rival.