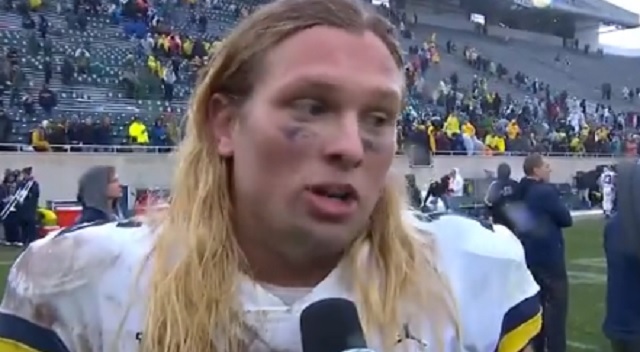 Things got a bit heated before today’s Michigan-Michigan State rivalry game when MSU players showed up late to take the field and confronted several Michigan players that were on the field.

There's no love lost between Michigan and Michigan State 😳
(via @FOXSports)pic.twitter.com/FCbz59FXey

Unfortunately for MSU they ended up taking the L today and Michigan players were ready to start talking their shit.

Immediately after the game ended, Michigan’s Chase Winovich blasted MSU players and called them UM’s “little brother” who had to be put in their place for acting up.

"We knew they couldn't hang with us… Sometimes your little brother starts acting up, and you just gotta put them in place."

“We came in here, (and) I openly, in the public called it a revenge tour, called them out and said that they were next,” Winovich said to Big Ten Network. “We came in here, slashed their field before the game. We still came out here and got after them every, single play. Like I said last week. The prior couple weeks were for the boys. This one was for our season.”

“We knew that they couldn’t hang with us,” Winovich said. “We did what we had to do. Sometimes your little brother starts acting up and you just have to put him in place. They tried. They gave it their best. It just wasn’t enough. Our guys came up on top, and we’re just going to continue to work and try to get better and go from here.”

Even Harbaugh had something to say about the pregame incident.

Harbaugh says what happened before the game was bush league on Michigan State’s part. “Coach Dantonio was five yards behind them and smiling.”