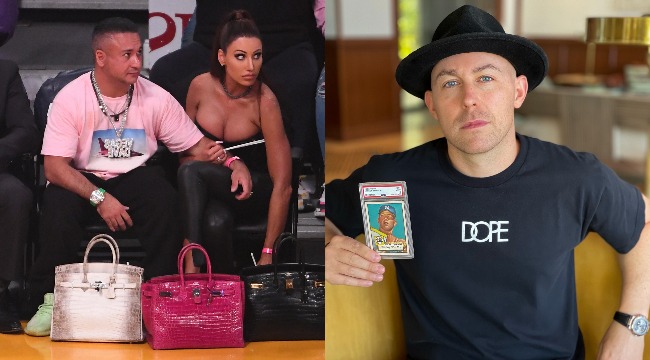 Stop what you’re doing and go get the dusty card binder under your childhood bed. One of us has gotta be sitting on a new life and we’re completely in the dark about it. Anyone got a Beckett? I have a Mark Madsen rookie card in mint condition and a wedding to pay for.

The sports card and memorabilia industry has ascended above a niche of collectors yearning for their glory days to a faction of sports culture, with eight cards selling for $900,000 or more (six in the last 12 months) and guys like Vegas Dave taking interviews from TMZ for selling a Mike Trout rookie card for the price of a waterfront mansion in Monterey.

In 2018, a notorious gambling influencer paid $400,000 for a signed Mike Trout rookie card. In August, he auctioned it for nearly $4 million. Meet Vegas Dave: https://t.co/StrD7bpbeZ pic.twitter.com/VA7SDqE5nf

For our visual learners, this is what a 2.5 inch x 3.5 inch piece of cardboard can get you in *spins wheel* Edmond, Oklahoma. 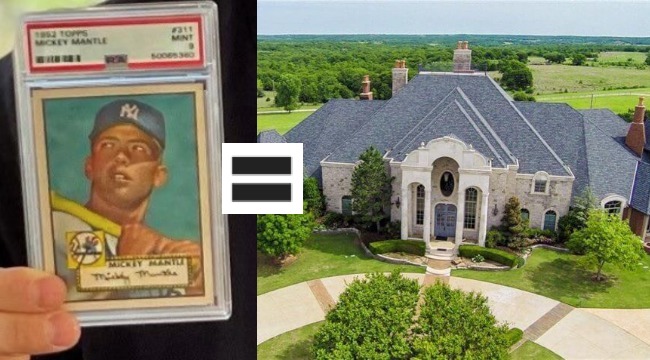 Gough purchased the card from NFL lineman Evan Mathis in 2018 for $2.88 million, netting nearly double in the most recent sale.

According to ESPN, there are only six PSA 9s (on a 1-10 grading scale) of this particular Mantle card still in existence. To the casual observer (me), with five other cards exactly like this still in circulation, it feels like the $5.2 million price tag is steep. I feel like a card with a picture on it should be 1-of-1 and have the ability to do your laundry if it warrants that price.

Still, Gough think it was underpriced.

“The 1952 Topps Mantle is the holy grail of sports cards,” Gough said. “As a kid ripping packs in the ’90s, I always dreamt of owning one. … I felt this Mantle was highly underpriced.”

Now I say this without knowing Mr. Gough and withholding any judgement about his character.

There are currently gem-mint condition PSA 10 Mantles in existence one of which was on” climate-controlled, UV-protected display and transported by armored car in Colorado in 2018.”

Interesting tidbit about the card sodl:

While not Mantle rookies, the 1952 cards are renowned for being Topps’ first annual set and for having been dumped, by the thousands, into the Hudson River in 1960 after overproduction.

Anyone got a Beckett and a snorkel I’m taking a dive in the Hudson and praying that $5.2 million can cure the AIDS I contract from that water.