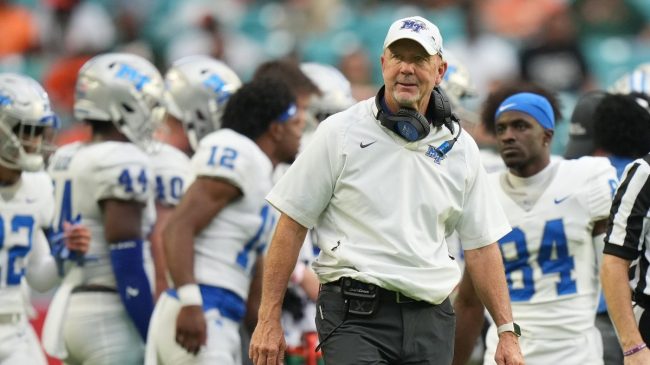 Somehow, someway, the Middle Tennessee State Blue Raiders found a way to upset the Miami Hurricanes. It was a bonkers game that had Middle Tennessee leading from the jump. Now, head coach Rick Stockstill delivers the most ruthless line you’ll ever hear and we don’t know if the Hurricanes will ever recover.

According to 247 Sports, Stockstill didn’t hold back when discussing his opponent. He made sure to remind Miami they paid Middle Tennessee State a handsome fee to play, then turned around and roasted the Hurricanes for their poor efforts in the run game.

Stockstill’s team was savage on defense. Especially in the first quarter of the game. The Blue Raiders didn’t allow the Hurricanes to run the ball effectively, which resulted in a massive victory for the program. Rick Stockstill’s squad walked into Miami, got paid $1.5 million, stuffed their opponents for 1.6 yards per carry, earned a win, then left.

It was a rather impressive day, especially considering Miami was a large favorite entering the game. However, the Middle Tennessee head coach put on a clinic, helping his team move on to a 3-1 record in the early portion of the season.

Since losing in Week 1, Rick Stockstill’s squad has looked solid in three games in a row. They aim to keep the win streak alive, as the Blue Raiders face off against UTSA on Friday. As long as this defense can stop the run and win games, then the Middle Tennessee head coach can talk all the trash he wants.