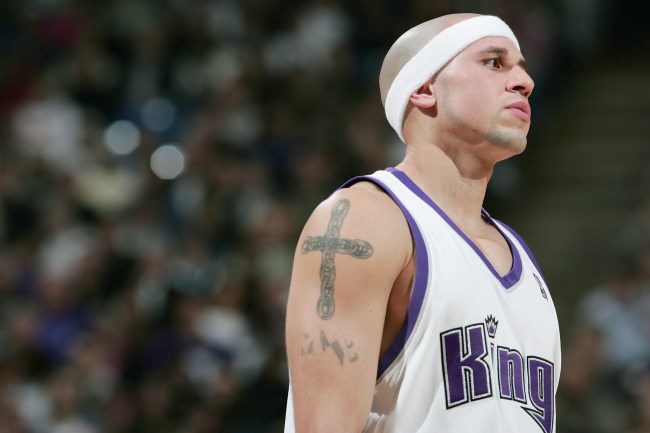 You’re not going to believe me when I tell you this, but Mike Bibby made more salary money in his 14 seasons in the NBA than Michael Jordan did in his. Jordan made a shade over $90 million, while Bibby made over $105 million before retiring in 2012. Bibby, a former number two pick overall, never made an All-Star team or won an NBA championship. That’s not to say the dude wasn’t solid, but sheesh.

In any event, those who grew up watching the NBA in the 90s probably don’t remember the 6’2” guard as a bruiser. He was built like, well, a guard.

Oh how times have changed. Bibby, now 40, currently serves as the head coach of Shadow Mountain High School in Phoenix and is a member of the Ghost Ballers team in Ice Cube’s Big 3 basketball league. He evidently spends the rest of his time picking things up and putting them down.

Check out this recent photo of Bibby with his son, Mike Bibby Jr., who plays at Appalachian State.

On a scale of 1-10, how JACKED is Mike Bibby 😳💪 pic.twitter.com/cnjLHJpe4n

Before we more on: check out those shooting stats on that machine. Bibby and his son made 600-of-764 shots. That’s nearly 80 percent. My oh my.

It’s tough to see that though considering Bibby’s arm is taking up 80 percent of the shot.

Gabrielle Union remembers her hubby throwing Bibby’s shoe into the stands during a game.

Barry Bonds out of 10

mike bibby about to show up in fast and furious 9 talking about family and drinking coronas https://t.co/Y5E57Nh4sM