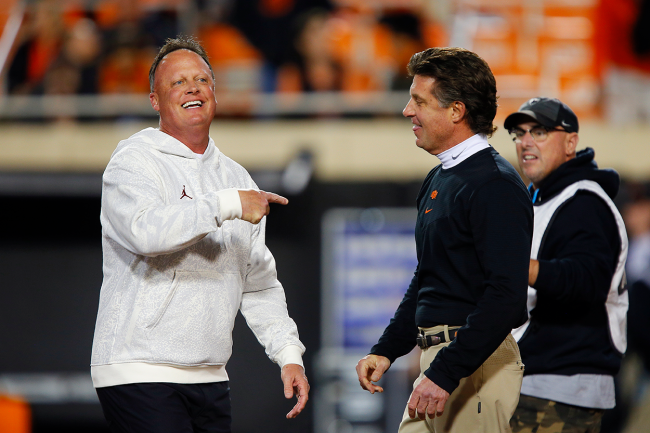 It does not sound like Mike Gundy will be coaching alongside his brother this fall. The 55-year-old head coach of Oklahoma State football spoke about the situation with Cale and revealed that he could soon be back to coaching after his recent resignation.

Cale, who spent 22 years at Oklahoma, stepped down from his role with the Sooners late last Sunday. He released a statement that left a lot of questions, but he explained that he had said a word that he never should have said.

The word, according to Gundy, was on one of his players’ iPads and he read it out loud.

In the wake of his resignation, many Sooners both past and present spoke out on Cale Gundy’s behalf. They all backed up his character, sung his praises as a coach, and expressed their disappointment about what went down.

Less than 12 hours later, Oklahoma head coach Brent Venables released a statement that also left a lot of questions to be answered. He claimed that Gundy said the word multiple times, which was a new development.

However, Gundy’s daughter Cat called out Venables for suppressing the whole truth. It left even more questions.

There is still a lot that is likely set to play out with the entire situation. Things could even get litigious.

In the meantime, Cale Gundy is without a job just two weeks before the start of the 2022 season.

Because of his blood relation to the head coach, it would make a lot of sense if he was to join the Cowboys’ staff. His brother Mike says that Cale joining him at Oklahoma State is not something they have discussed, but he did reveal that Cale has multiple opportunities to get back in the game.

“He’s got several other options right now that he’s looking at,” said Mike. “I haven’t talked to him about that.”

It sure sounds like Cale Gundy could be back coaching football sooner than later. Just not in Stillwater.