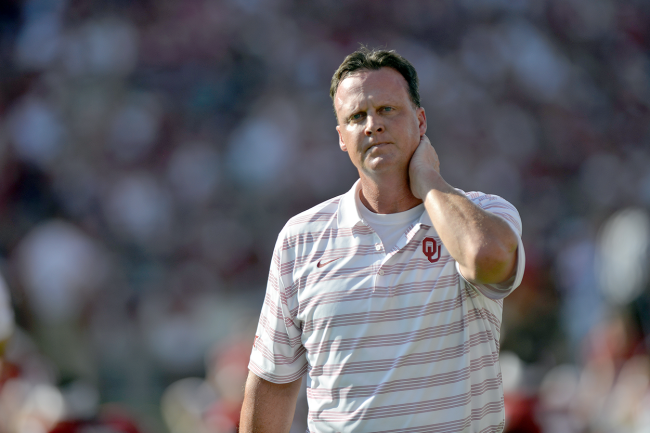 After 23 years coaching football at the University of Oklahoma, Cale Gundy resigned late on Sunday night. Gundy, who served as the wide receivers coach and assistant head coach with the Sooners, will no longer be with the program, effective immediately.

Although the entire situation is extremely unclear, and there are many, many questions that are left unanswered, Gundy’s decision comes after an incident during a film session. According to his resignation letter, it stems from saying a word that he never should have said.

Gundy said that he asked his players to take notes during film last week. He noticed that one player was not paying attention.

In turn, the 50-year-old brother of Mike Gundy walked over the the player and picked up his iPad. After doing so, Gundy read the words written on his screen out loud to the room. He says that the words were unrelated to football entirely.

During the read aloud, Gundy said a word that he never — “under any circumstance” — should have read out loud. He says that he was simply reading to read and glossed over the true meaning of each word. When Gundy got to the word that should not have come out of his mouth, he immediately knew that he should not have said it.

Despite the lack of intent or malice, Gundy says, he takes full responsibility and apologizes. Here is his full statement:

Head coach Brent Venables, who was hired prior to the season, released the following statement:

Despite Gundy’s mistake, according to multiple reports, many — if not most — players on the staff wanted Gundy to stay. He chose to step down anyway.

Talked to a few current players about the situation earlier today. Seemed like the team had talked through it and the vast majority wanted Cale Gundy to stay. But ultimately…Cale did what he thought was best for the program.

Gundy has been with the university since 1999 and has served in a variety of offensive roles. In response to the news, many current, former and future Sooners spoke out about the decision and voiced support for their former coach or disappointment about the decision.

As did Adrian Peterson.

Other players also spoke up.

Coach Gundy, one of the best Coaches and mentors the University has ever seen. There are no positives that come from this.

Salute for all you’ve done for me and my teammates. 🙏@OU_CoachGundy pic.twitter.com/j04c3u4C10

I have nothing but love for @OU_CoachGundy he’s done so much for me and my family!

@OU_CoachGundy you were one of my reasons for even coming to OU!!! Take a little time off and let’s go chase for 8