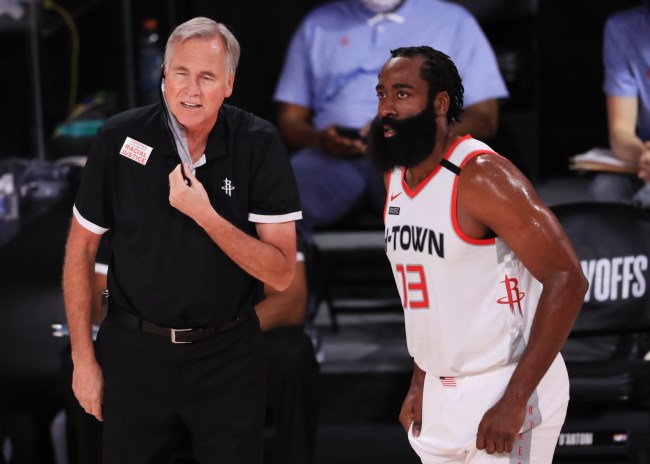 During his four-year run as head coach of the Houston Rockets, Mike D’Antoni did some good things — like lead the team to the playoffs in each season — but, ultimately, his squads underperformed on an annual basis. Never was that more evident than in the 2018 NBA Playoffs, when Houston shit the bed and couldn’t make a damn shot to win a Game 7 on their home floor against the Golden State Warriors.

While D’Antoni has been an offensive (and innovative) genius for the past few decades and has seen success at lots of stops along the way, his tenure in Houston ran out for one common reason: He could never take the franchise to the Promised Land, and could never develop the right defensive scheme that paired with some of the gaudy, free-flowing offensive numbers his Rockets had.

Now unemployed after leaving Houston, there are some rumors out there that the Philadelphia 76ers could hire Mike D’Antoni to try and right that previously sinking ship, which, like the Rockets, have underperformed over the past couple of seasons. While at least one of the team’s superstars, Joel Embiid, would apparently approve the hire, the decision to go with the 69-year-old D’Antoni is apparently about one looming decision that can be made in a couple years: James Harden‘s free agency.

According to John Clark of NBC Philadelphia, he’s hearing that the Sixers are aggressively pursuing D’Antoni in hopes that he’ll provide the ammo to lure the one-time league MVP and three-time scoring champ to Philly in a couple years. No, seriously, that’s a rumor that’s actually happening right now.

Harden can become a free agent in 2 years and there is possibility of trade pic.twitter.com/gJVecCuhHN

On the surface, D’Antoni’s presence in Philly could be a deciding factor in Harden’s future plans. After all, the eight-time All-Star did go from star to top-5 player in the league under his now former head coach, and, recently, spoke glowingly about wanting to bring back the head coach next season. Plus, Harden reportedly told the head coach the team needed to make changes last offseason and trade Chris Paul; which they did. Ultimately, though, Mike D’Antoni made the call to move on.

Does James Harden want Mike D'Antoni to return to the Rockets? "Of course. Of course. Mike has done some unbelievable stuff here."

However, Harden will be 33 in 2022, and, just because he appears to be a fan of D’Antoni doesn’t mean he’s planning to pair up with him forever. Who’s to say the Rockets don’t hire a bona fide stud as his replacement, Harden wins MVP next season and leads Houston to a title? Does anybody really think the guard would want to leave? Plus, when do we ever see a player follow a coach anywhere? Almost never.

Look, there’s no denying Mike D’Antoni’s system benefited a ball-dominant player like James Harden. But the guard is a superstar in the NBA with or without the guy as his head coach, so the thought that Harden would leave Houston to reunite with D’Antoni seems like a bit of a pipe dream.