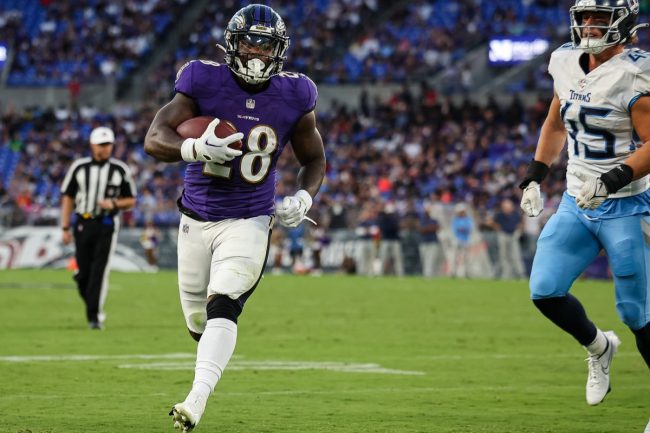 Mike Davis saw some preseason action on Thursday night, suiting up for his new team in Baltimore.

The veteran running back has bounced around the league throughout his career, spending last season in Atlanta. He’s also played with the Panthers, Seahawks, Bears, and 49ers.

While often used in a reserve role, the bruising back has tallied three 500-yard campaigns over the last four years, and he should get some playing time in a Ravens offense that likes to run the ball.

Baltimore took on the Titans this week in their first preseason game of the year, and Davis showed out.

He notched the first touchdown of the game, scampering four yards to the endzone. He totaled 22 yards on five attempts, but maybe his most notable play of the game didn’t come while he was carrying the rock.

Mike Davis was seen in pass protection early in game action, and on one play in particular, he absolutely blasted a defender on a chip play. A de-cleater, if you will.

The 5-foot-9 back took edge rusher Rashad Weaver head on, squaring him up and running right through him. Davis gives up about seven inches and 40 pounds to the defender, but that didn’t matter on this occasion.

Davis drove Weaver to the ground, then continued on his route.

After a clip of the play was posted to social media, Davis had the most hilarious response.

Man I just hope I don’t get in trouble for this https://t.co/xnpIzk8LvY

“Man, I just hope I don’t get in trouble for this.”

While Davis likely said the quip in jest, the NFL is known for being tissue-paper soft when it comes to these kinds of things.

Davis and the Ravens will continue on through the preseason before gearing up for a playoff run in 2022. Be on the lookout for more punishment to be dished out from the back.