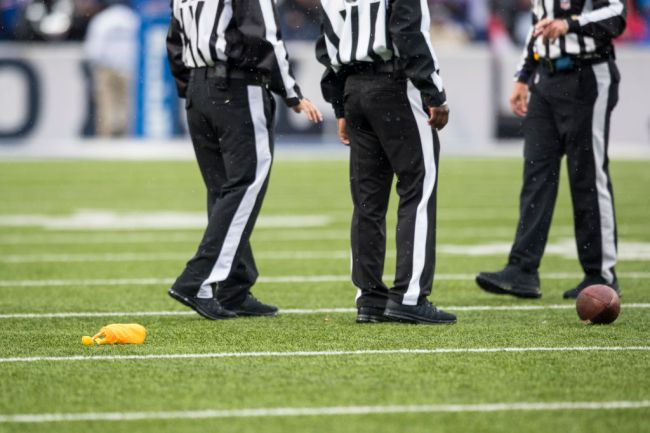 The NFL’s preseason hasn’t even completed its second set of games, but one of the league’s worst rules has already popped up at an unfortunate time.

The New England Patriots had a second and goal from the New York Giants 4-yard line after quickly working their way down the field. On second down, Brian Hoyer tried to throw the ball to Kristian Wilkerson in the end zone. The pass was broken up by New York Giants cornerback Aaron Robinson, who then made the signal for an incomplete pass while standing over Wilkerson.

The refs deemed that to be enough to warrant a taunting penalty on Wilkerson, giving the New England Patriots a 1st down at the 2 and they scored 2 plays later.

The NFL has some ridiculous rules that players and coaches have to deal with. There’s the uniform policy that is going to prevent Kyle Shanahan from wearing the hat he wants during the 2022 season. There are those roughing the passer calls because a defensive player lightly touches the head of the quarterback.

Still, the league’s most ridiculous one has to be the one designed to protect the feelings of the grown men who spend every week colliding with each other at full speed.

There isn’t really any reason for the NFL to hand out 15-yard penalties and the possibility of a disqualification for taunting, but there is even less reason for it to be the result of something so soft.

Players need to be able to celebrate when they make big plays and this was a huge play for Aaron Robinson in the context of this game. The Patriots had worked their way down the field by targeting Robinson, completing a 33-yard pass to Kristian Wilkerson with Robinson in coverage.

Breaking up that pass gave him some measure of redemption until the refs decided to flag him, setting up a Patriots touchdown where he was once again covering the receiver who made the catch.

It’s a pointless rule and the NFL really needs to stop punishing these kinds of celebrations.