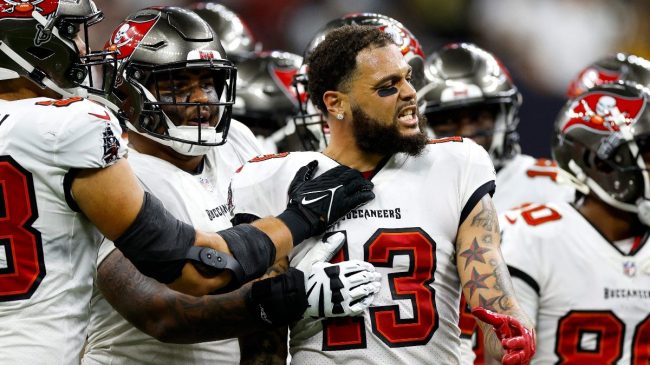 Things got heated during the Tampa Bay Buccaneers-New Orleans Saints game on Sunday. Tempers flared to the point where a brawl ensued which led to Mike Evans and Marshon Lattimore getting ejected. Tom Brady was even seen having some choice words during the scrum. Now, the NFL has dished out punishments, and Bucs fans aren’t too pleased about it.

According to Tom Pelissero, Mike Evans has been given a one-game suspension for his actions on Sunday. He’s the only player who received any punishment from the NFL. It makes sense considering Marshon Lattimore was technically defending himself during the scrum. Additionally, no other Buccaneers players threw any punches or pushed anyone to the ground.

1-game suspension for Mike Evans, per source. No other suspensions from the brawl.

Of course, Mike Evans is going to contest the suspension, per Tom Pelissero. Although Evans was the clear aggressor, he’s hoping to appeal the NFL’s decision. So, more information will be released on that, but for now, the one-game suspension is locked in place.

From NFL Now: #Bucs WR Mike Evans is suspended one game for his role in the scuffle. And per @TomPelissero, he's appealing. pic.twitter.com/4sE2YwkYbf

Even though Evans likely deserves the one-game suspension, Buccaneers fans aren’t pleased with the news. The NFL clearly believed he was the only player deserving of punishment and Tampa Bay is letting the league know how they feel.

We’re agreeing with J-Bird on this one.

Why would lattimore be suspended?

Buccaneers fans can’t fathom the idea of Marshon Lattimore not getting suspended.

How tf Lattimore not suspended a game??

Yeah. What about the tablet, Gabe? It didn’t deserve to be tossed like that.

What about the tablet it got totaled lol

We’ll see if Mike Evans can appeal his suspension or not. The NFL isn’t likely to change its mind. Even so, this is a brutal loss for the Buccaneers, as Tom Brady is without one of his most consistent receivers for Week 3.