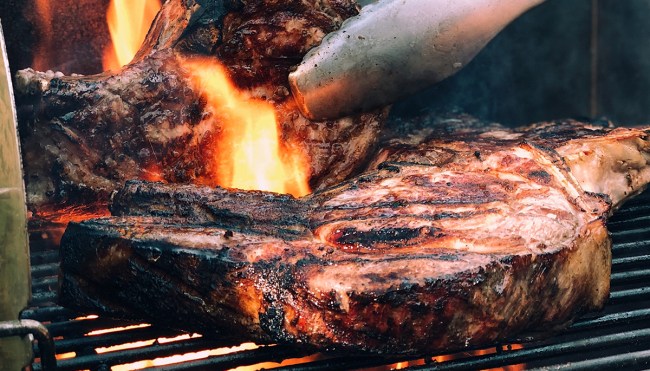 NFL insider Mike Florio of Pro Football Talk is known for his abilities to break sudden sports news to the public. He was one of the first on the scene when Tom Brady decided to come out of retirement. His NFL draft coverage was fantastic. He acted quickly on the latest Jerry Jeudy arrest in Denver.

If something is happening in the world of pro football, Florio is the man to seek out.

It appears that he might want to keep that day job for a few more years after seeing his subpar skills on the grill.

Florio posted a photo of him attempting to grill a wagyu steak over the weekend, but the finished product doesn’t look at all appetizing.

Trying this again. I needed to give Steak Twitter something to chew on. Wagyu strip. 18 ounce. 🔥🔥🐮☠️ pic.twitter.com/JepqAZUQnM

The cut looks more like tuna than beef, getting a well-done ring around the outside while still being rather rare in the center. Maybe this is how Florio likes his steaks, but for the rest of the world, it was a complete failure.

Take a look at some of the social media reaction.

Who puts a frozen steak on the grill https://t.co/syMN931pzK

Meat wasn't brought up to room temp before cooking

How on earth did you make the first 1/4 inch well done and the middle rare. That’s a real skill

Unlike this steak, you’re getting properly cooked for this

Fans, media, football players, and even chefs weighed in on the botched attempt. The comments section was absolutely brutal.

Most point out that it looks like the meat was slapped onto the grill cold, rather than having it rest and get up to room temperature. Some even joked that it looked frozen.

This wagyu cut was a huge waste of at least a couple hundred dollars. Florio should try to fine tune those skills on the grill before posting another picture on social media. If not, he’ll likely get cooked again.