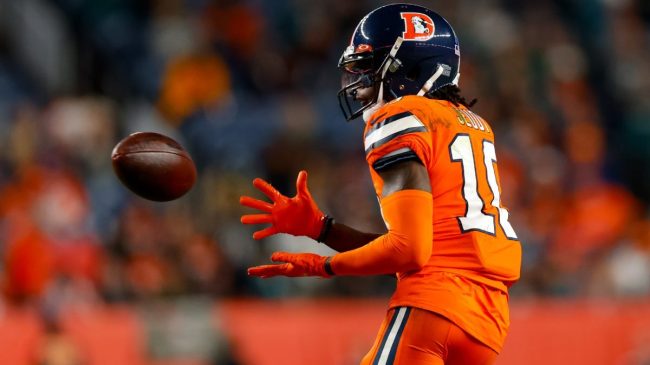 The Broncos wide receiver was booked on charges of second-degree criminal tampering with a domestic violence enhancer, NFL insider Ari Meirov reports, which is a misdemeanor.

Jerry Jeudy update via @ArapahoeSO: Jeudy is being held on charges of second degree criminal tampering with a domestic violence enhancer, a misdemeanor. He's on a no bond hold. He's innocent until proven guilty. https://t.co/AQZo5uaZKP

According to Colorado case law:

“A person commits the crime of second degree criminal tampering if he tampers with property of another with intent to cause injury, inconvenience, or annoyance to that person or to another or if he knowingly makes an unauthorized connection with property of a utility,” per Colorado case law. “Second degree criminal tampering is a class 2 misdemeanor.”

The charge could spur from something relatively minor, though the domestic violence enhancer makes it seem that this was an argument or dispute with family or someone he lives with.

Due to that relationship with the accuser, he won’t be able to post bond.

Jerry Jeudy will stay in jail until he sees a judge because this involves domestic violence.

That will likely take place in the next 24 hours.

The wideout was a first round NFL draft pick in 2020, and he experienced a breakout rookie season with the Broncos. Last year, he took a step back, but he was expected to be one of the top targets of incoming quarterback Russell Wilson, whom the team signed over the offseason.

As you can expect, the shocking news caused quite the stir on social media.

Arapahoe Sheriff announced that Broncos’ WR Jerry Jeudy is “being held at the Arapahoe Co jail on charges of 2nd degree criminal tampering w/a domestic violence enhancer, a misdemeanor. He's on a no bond hold. He's innocent until proven guilty.”

The charge against #Broncos WR Jerry Jeudy — 2nd-degree criminal tampering — in Colorado means tampering with another person's property "with intent to cause injury, inconvenience, or annoyance."

The domestic-violence enhancer is based on Jeudy's relationship with the accuser.

Many have been quick to note that he’s now the second former Alabama wide receiver to be arrested this offseason. Former teammate in Tuscaloosa Henry Ruggs was booked for a drunk driving incident that ended with someone being killed.

While Jeudy’s charge is much less serious, there is a chance that he could see jail time. It appears the maximum sentence carries up to a year in prison and a $1,000 fine.

Jeudy is innocent until proven guilty. We will see how this plays out for him and the Broncos in the coming weeks.