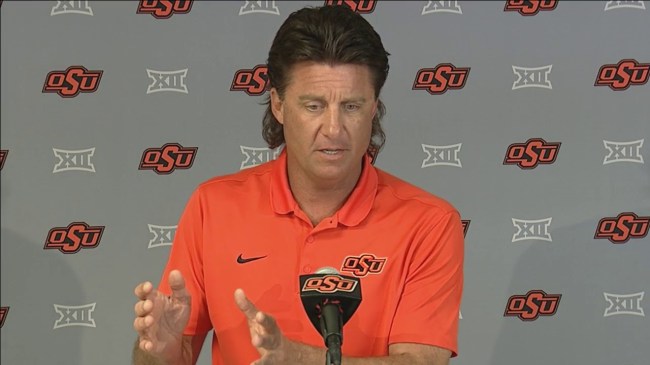 I love Mike Gundy. I mean, I’m not an Oklahoma State fan by any stretch of the imagination, but the outspoken, mullet-rocking, high-octane offense having head coach of the Cowboys is so entertaining that it’s hard not to appreciate all that he does. So, thank you, Mike Gundy, for being awesome.

While Gundy’s “I’m a man, I’m 40,” rant from a decade ago was his best soundbite, the one he gave us yesterday during his press conference after Oklahoma State’s surprising 38-35 victory over No. 6-ranked Texas isn’t too far behind. Just listen to Coach Gundy’s hilarious take on Twitter, basically taking a big steamy dump on everyone who uses the social media platform because of “critics” who voice their opinions on in 280 characters or less.

Uh, damn, doesn’t seem like Mike Gundy will be using the tweet machine anytime soon, does it?

The coach was outspoken about Twitter following criticism about his current quarterback, Taylor Cornelius, who, after throwing 4 TDs and 3 INTs in his previous two games for the Cowboys (both losses), stepped up in a big way by leading OSU to an upset over the Longhorns. Where’d that criticism come from? Of course, Twitter, which led Mike Gundy to this epic display of emotion.

As someone who doesn’t use Twitter too often — yes, I’m part of the media, I know — can’t say that Mike Gundy doesn’t have a point about the social platform. Hell, I even wrote last week about how an Ohio State Buckeyes player, offensive lineman Branden Bowen, shared all the hate he received following the Buckeyes’ upset loss last week to Purdue, showing just how awful Twitter can be when fans let their emotions get the best of them.

That said, never in my wildest dreams did I think that hate for Twitter would lead to a grown ass man making fart noises to describe his feelings. Then again, not many people are like the perfect lettuce having Mike Gundy — and it’s just the latest reason why he’s the F’in man.