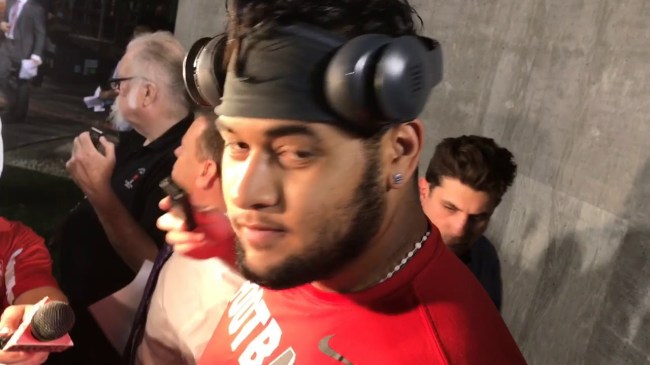 We all know that being a pro or college athlete is tough work. Not only do these people put hours into training, watching film and then actually going out there and performing on a high level, but they have to deal with a ton of other bullshit from the media and rabid fans. Fair or not, that kind of comes with the job description of being in the limelight, I think they all understand that.

That said, whether a pro or college athlete, they’re still human beings who aren’t perfect. Unfortunately, sometimes fans seem to forget that, voicing their opinions via social media with mocking or hateful messages. The latest example? Ohio State Buckeyes lineman Branden Bowen, who shared this DM he got from a Buckeyes fan following the team’s surprising 49-20 loss to Purdue last night, which, for all intents and purposes, probably ruined any chance of a College Football Playoff appearance.

Here’s what the fan sent to Bowen.

Just a sneak peak at what we deal with after a loss. And I was just at home sitting on my couch 🤷🏽‍♂️ pic.twitter.com/5Zzp2r5EnR

Uh, what? This @KennyTheRooster guy sure seems entitled AF about “his” team, doesn’t he? Not only that, but Branden Bowen isn’t even active this season after having to undergo a third surgery on his leg, meaning the 6’7″ lineman didn’t even play in the loss to Purdue. What in the hell is wrong with some people?

Anyway, because criticism comes with the territory of being an athlete in the limelight, it was Bowen taking the high road and refusing to take the bait from the Twitter troll. But, c’mon, the guy is a behemoth, so if he wanted to challenge the social media bully to a real fight, I’m guessing he’d win. Rather than take part, though, Bowen tweeted out this.

I’m aware this is a very small minority’s of every fan base out there! Don’t get it twisted, I appreciate and love all of BuckeyeNation! See y’all for the bounce back on November 3rd in The Shoe! #GoBucks 🅾️

I assure you the outpouring of support is much bigger than the negativity! I’m not bothered by the negativity, just wanted to give those who aren’t aware, an idea of what goes on. Thank you all. I love #BuckeyeNation 🅾️✊🏽 pic.twitter.com/cqXNQSq3n5

Kudos to the kid for playing it cool and not firing something back that would’ve gotten him bad headlines.

Hey, sports fans, it’s time to get your sh*t together and stop acting all high and mighty. In the past week, we’ve seen a Patriots fan throw beer in the face of a player, Tyreek Hill, and continue to hear stories about dumbasses like this Twitter troll abusing a college kid. Sports can be unkind, F’in deal with it.