Mike Krzyzewski Talks About Why He Turned Down Opportunities To Coach The Lakers, Celtics And Sixers 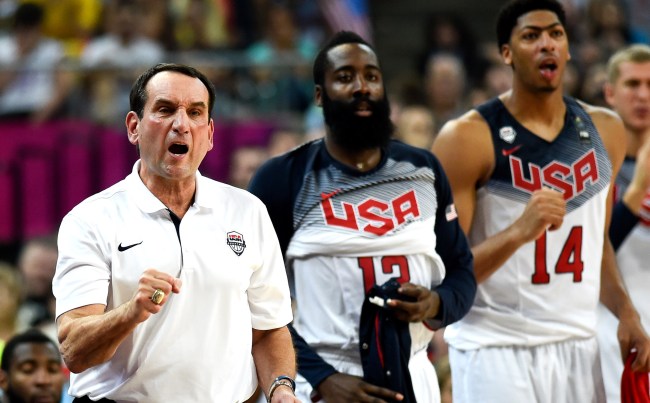 Despite winning almost 1,100 games in college basketball, Duke head coach Mike Krzyzewski has never coached a day in the NBA.

It’s not like he doesn’t know how to coach NBA players either.

So he definitely knows how to coach professional basketball players.

He’s also certainly had offers to move up and become a head coach in the NBA, but it has never happened. Why?

During a recent interview with the 94WIP Morning Show in Philadelphia, Krzyzewski talked about those opportunities and why they never resulted in him taking his coaching talents to the NBA.

In fact, in 2003, Billy King, who played for Krzyzewski at Duke and was at that point the general manager of the 76ers, asked him to come coach for them after their coach Larry Brown resigned.

“I’ve been fortunate,” he said. “If you’re a successful coach or businessperson, you’re going to have opportunities. When professional opportunities occurred … I love Duke, in addition to college basketball. I love working at a university environment. You’re surrounded by great people, not just in sports. It has been proven to be pretty pure. It’s getting crazy now, but that was kind of (King) to even ask.”

As we all know, he turned down the offer, but there were a couple of other occasions where he almost made the jump.

“I wasn’t interested in anything at that time,” said Krzyzewski. “Two times, I was pretty interested. In 1990, when Dave Gavitt took over the Boston Celtics, I did interview with them. And in 2005, with the Lakers, at the end of the day, I didn’t do it. Ironically, in 1990, when I didn’t do it, the next two years, we won our first two national championships.

“In 2005, when I didn’t accept the offer, a few months later, Jerry Colangelo offered me the opportunity to coach the national team as the first (permanent) national team coach. I was able to do that for 11 years. I got my NBA fix, so to speak. I’m really happy I got that.”

I guess when you look at it that way, Krzyzewski really got to have his cake and eat it too. Smart.