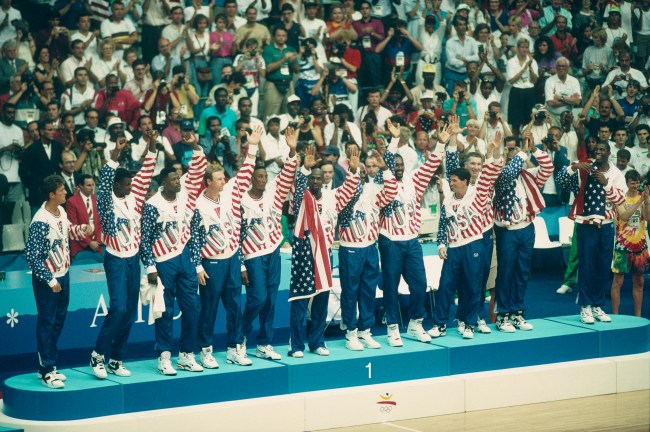 David Robinson, AKA “The Admiral,” was pretty soft-spoken during his NBA playing days, and wasn’t really known for speaking his mind too frequently. That worked well for him, too, as the guy ended up winning the 1995 league MVP, earning two NBA titles and, eventually, finding himself in the Hall of Fame. Unlike other superstar players in the ’90s — like Michael Jordan and Charles Barkley, among others — there aren’t too many interesting stories about Robinson.

While David Robinson was often quiet and went about his business back then, the former San Antonio Spurs center decided to weigh in on a topic that’s gotten plenty of attention lately because of The Last Dance, the ESPN documentary about Michael Jordan and the Chicago Bulls. In one of the recent episodes, Jordan was asked about the iconic ’92 Dream Team — as well as MJ’s individual rivalry with Isiah Thomas — with the six-time champ addressing rumors that he was responsible for keeping Thomas off the team.

Over the past two-plus decades, many thought that Jordan didn’t want Isiah Thomas part of the squad because of their previous battles in the playoffs — with MJ even referring to Thomas as an asshole in the documentary. That theory was partially squashed by Magic Johnson in a 2009 book, which claimed Magic helped keep Isiah off the team due to demeaning remarks about his sexuality in the early-90s.

Fast-forward to more recently, and David Robinson’s here to offer up his opinion on the whole thing.

As a guest on the Bulls Talk Podcast, The Admiral described a major reason why Isiah Thomas was left off the Dream Team roster. It wasn’t as personal as the claims made by Magic Johnson, or the theory about Michael Jordan, but simply because a lot of guys on the Dream Team just blatantly didn’t like Thomas’ reputation as a Bad Boy on the Detroit Pistons. Take a look below at what he had to say.

“If you have a reputation and you take pride in your reputation as a ‘Bad Boy’ it kind of means people aren’t going to like you,” Robinson said, via NBC Sports. “Can you be that surprised when people say ‘I don’t really want to play with the ‘Bad Boys?’

“When you talk about putting together a team, chemistry matters. It does,” Robinson added. “You can’t act like it doesn’t matter and for that team it was clear that was a consideration for all the people involved.”

This makes a helluva lot of sense, because, generally speaking, Isiah Thomas burned bridges with other superstars with some of the things he said or some of the ways he acted during his run with the Pistons in the late-80s and early-90s. What David Robinson claims here is absolutely accurate, because, while the Dream Team would’ve won a gold medal regardless of Thomas being on the team or not, the chemistry between players is often what all those Hall of Famers enjoyed most. Who knows if that all happens with Thomas on the team.

Bottom line is this: Success comes from culture, not just talent, and, as most of us all know, when you work with people you hate, it usually doesn’t lead to very much happiness. Sure, Isiah Thomas could’ve joined the Dream Team and they would’ve still been every bit as dominant, but it wouldn’t have been nearly as fun for most of the players — and it’s pretty cool to see David Robinson come out and just tell it like it is.