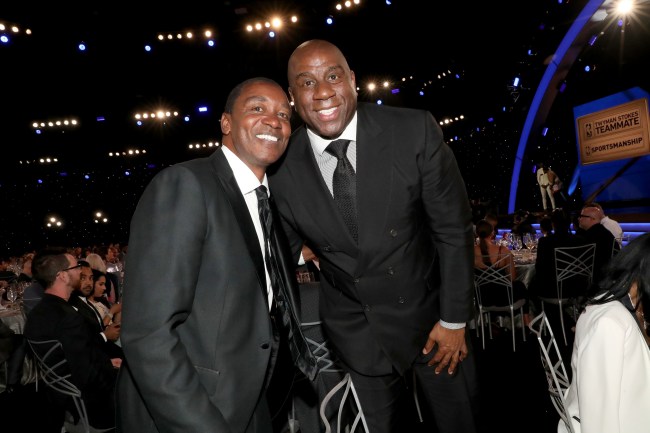 Magic Johnson and Isiah Thomas are two of the best basketball players the NBA has ever seen, and helped reshape the entire league back in the ’80s from an image problem that involved lots of partying and drug use by players. During that time, both Magic and Isiah built a healthy relationship together, and were considered to be pretty friendly towards one another — until they stepped on the basketball court.

While both guys seemed to have respect for one another and eventually ended up in the Basketball Hall of Fame, that doesn’t mean there wasn’t turmoil between the two. In fact, now that everyone’s reigniting and debating the rivalry between Isiah Thomas and Michael Jordan after episodes from The Last Dance — a documentary on Jordan and the Chicago Bulls — one can’t forget that Magic Johnson and Thomas had a little bit of beef as well; and it may have kept Thomas from playing on the heralded Dream Team in the 1992 Summer Olympics.

Most people believe that it was Jordan’s rivalry with Thomas that kept the former Detroit Pistons star off of that dominant team — which included 11 Hall of Famers. But, according to the book “When the Game Was Ours” by Jackie MacMullan, which was released in 2009, it was actually Magic Johnson who had the most influence in keeping Isiah off the roster.

So what was Magic’s reasoning? As the book hints at, it was because Johnson believed Thomas was spreading rumors that he was either gay or bisexual after his HIV announcement in 1991. While this was something some had thought at the time, Magic was blindsided hearing that Thomas may have believed it — and was repeating it to other people.

In the book, which Johnson co-authored with Larry Bird and frequent ESPN contributor Jackie MacMullan, Johnson admits he helped keep Thomas off the 1992 U.S. Olympic Dream Team because he believed that, in the wake of Johnson’s announcement in 1991 that he had HIV, his once-dear friend spread a rumor he was gay or bisexual.

For most of the public, this is a startling admission, but Johnson’s sexuality has been gossiped about in NBA circles for years. That can be chalked up to ignorance about his disease. Thomas, now the men’s basketball coach at Florida International University, denies speculating about Johnson’s sexuality and told SI.com he feels “blindsided” by the allegations because this is the first time Johnson is publicly airing his side of the story.

Whether or not that’s actually true is up for debate. Maybe it was a combination of both Michael Jordan and Magic Johnson who would have refused to play on the Dream Team had Isiah Thomas been a member, and not just one of the superstars being solely responsible. Regardless, back in 2009, Johnson still talked about how his relationship with Thomas just sort of ended.

“It was time. We had an incredible relationship. We used to do everything together back in the day, and then that kind of faded. It was a tough period. Probably when we played those two championships made that happen. Then it just really went in opposite directions from then.”

Regardless, even though all of this happened nearly 30 years ago, Thomas still blames Jordan for being the one with the biggest voice — believing it was due to the Pistons not shaking hands after a loss in the 1991 Eastern Conference Finals to the Bulls — and even reiterated how hurt he still is today that he wasn’t a part of the Dream Team. Take a look below.

Isaiah Thomas: "If I'm not apart of the Dream Team because of a lapse in emotion in terms of not shaking someone's hand, if that's the reason why I didn't make the Dream Team, then I am more disappointed today than I was back then when I wasn't selected." pic.twitter.com/5QQk3kmX0g

Who knows what really happened and why Isiah Thomas really didn’t end up on the Dream Team. But considering Magic Johnson flat out admitted he played a major role and influenced the decision should remind fans that it wasn’t (all of) Michael Jordan’s doing.