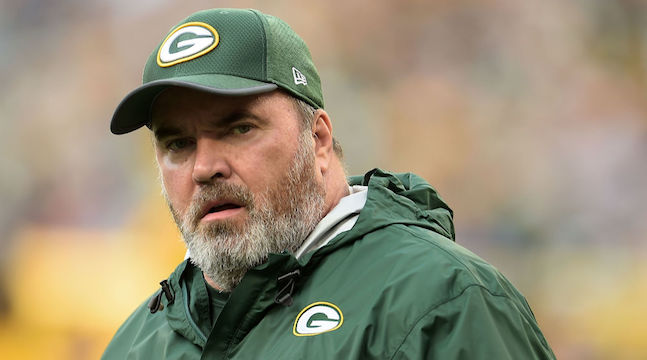 It’s 2017, so it’s virtually impossible to talk about replacement quarterbacks without Colin Kaepernick’s name entering the discussion. He might have played his last game in the NFL over a year and a half ago, but he hasn’t strayed far from the headlines since then.

Aaron Rodgers put a serious dent in the Packers playoff hopes this week when he shattered his collarbone, and while the team had a couple of backups ready to step up to the plate, that didn’t stop a reporter from bringing up Kaepernick’s name at a press conference on Monday. Based on his answer, it was clear Packers coach Mike McCarthy is not interested in the former 49er.

If you can’t watch the video, this was his full response:

“Did you just listen to that question I just answered? I got three years invested in Brett Hundley. Two years invested in Joe Callahan. The quarterback room is exactly where it needs to be. OK? We’re fortunate to have a great quarterback in Aaron Rodgers. We’re committed to the path that we’re on. We need to play better as a football team.”

While Kaepernick might not be the right fit for the Packers, there have been a couple of instances this year where many people thought he should have been given a chance. The Dolphins made the disastrous decision to sign Jay Cutler back in August, and the Titans caught a fair amount of flack when they decided Brandon Weeden was the best option as a backup for Marcus Mariota.

Kaepernick recently filed a grievance against NFL owners over accusations of colluding to keep him out of the league, which probably won’t help his chances of getting back into football anytime soon.