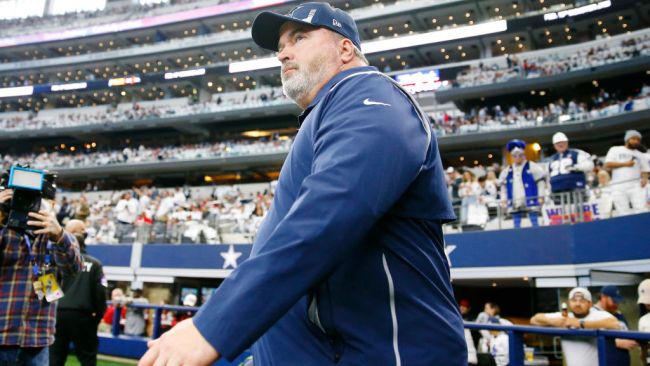 Despite there being just 13 seconds left on the clock in Sunday’s AFC Divisional Round matchup between the Buffalo Bills and Kansas City Chiefs, Patrick Mahomes and the Chiefs were able to drive from their 25-yard-line into field goal range to allow Harrison Butker drill a game-tying 48-yard kick as time expired.

While Chiefs head coach Andy Reid has never been known for his clock management skills, the Chiefs handled the final 13 seconds of regulation virtually perfectly to give themselves a chance to tie, and ultimately win, the pivotal playoff game.

A hilarious result of the Chiefs’ excellent late-game management has been the fact that Dallas Cowboys head coach Mike McCarthy has found himself as part of the conversation as fans highlight the contrast between how the Chiefs handled the final 13 seconds of their game compared to how the Dallas Cowboys managed the waning moments of their loss to the San Francisco 49ers last weekend.

It would be a great time for a QB draw. —Mike McCarthy

What Cowboys ’ HC Mike McCarthy told Dac Prescott in the final 14 seconds of regulation: “When it’s sad, be the sad sack.” https://t.co/GidCAnHjCM

Look, it’s not Mike McCarthy’s fault he had one second too many to win the game.

Mike McCarthy is FUMING this morning 😂😂

@RyanClark25_ Dak Prescott and Mike McCarthy needs too watch Dan break this down so they can learn how too manage the clock in late game situations. pic.twitter.com/t0gSNaQpzS

Mahomes and Andy Reid will send the tape to Mike McCarthy and the Dallas Cowboys. Clock Management 101. pic.twitter.com/ScIRdEDK2o

"The chart says run a QB draw!" — Mike McCarthy from his couch (probably)

With their thrilling overtime triumph over the Buffalo Bills, Patrick Mahomes and the Chiefs will now host Joe Burrow and the Cincinnati Bengals — fresh off of their road upset of the top-seeded Tennessee Titans — in the AFC Championship game on Sunday, January 30. Over in the NFC, the Los Angeles Rams and San Francisco 49ers — NFC West rivals who faced off in the final regular-season game of the year — will meet in L.A. for the NFC Championship game that same day.