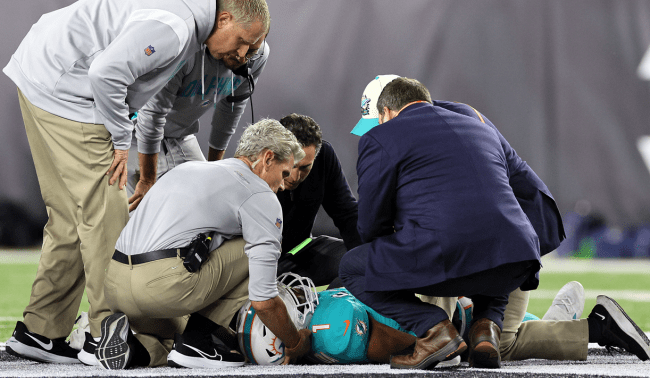 Many (almost all) NFL fans who saw Tua Tagovailoa hit his head on the turf last Sunday in the game against Buffalo, stumble and then have to be helped to stay upright couldn’t believe he was allowed to return to the game.

The 24 year-old Miami Dolphins quarterback went into concussion protocol after the troubling scene, but he and the doctors claimed it was a back injury that caused his disturbing inability to stand upright.

That diagnosis was met with much skepticism and many expressed concern about Tagovailoa coming back to play on Thursday night on such short rest.

One of those people was Chris Nowinski, Ph.D., the founding CEO of the Concussion Legacy Foundation.

I'm calling bull$hit on the "back tweak theory". Watch the vid. Tua shakes his head multiple times to "clear the cobwebs", which is a specific sign of vision impairment after #concussion. He also wobbles getting up before falling. His return is a fail @NFL pic.twitter.com/oLUNiGsc2A https://t.co/zDauYxvuLc

“If Tua takes the field tonight, it’s a massive step back for #concussion care in the NFL,” Nowinski tweeted Thursday afternoon.

“If he has a 2nd concussion that destroys his season or career, everyone involved will be sued and should lose their jobs, coaches included. We all saw it, even they must know this isn’t right.”

Sadly, Nowinski was smarter than the medical people who are supposed to be taking care of players like Tua Tagovailoa.

I take no pleasure in being right. Pray for Tua. We saw this coming. Get angry. Get involved with @ConcussionLF to make sure the @NFL can't do this again. https://t.co/qbZLlgvk5S

After the game, Dolphins head coach Mike McDaniel was adamant that he and the Dolphins medical staff made the right decision to play Tagovailoa and wouldn’t have changed a thing.

“Absolutely not,” McDaniel said when asked that very question.

“That would be irresponsible in the first place, and I shouldn’t be in this position,” McDaniel added. “I do not have any — absolutely zero — patience for, or will ever put a player in position for them to be in harm’s way. That is not what I’m about at all, and no outcome of a game will ever influence me being irresponsible as the head coach of the football team.”

He wasn’t done defending the decision.

“It starts with your medical staff, but then there’s independent specialists that look into it, too,” he said. “There’s an entire protocol, and then you’re talking to the player as well. Probably, I don’t know, five or six different layers of a process in decision-making.

“I don’t think any injury from last week made him fall the same way this week.”

“I knew right away that this was at least a concussion,” he said. “What I was worried about was other things on top of that. Obviously I was very worried about his head, but you want to make sure that all things with relation to the spine and back and all that stuff, you want to make sure that’s okay. But it was very clear to me from the onset that he had … I didn’t really know the degree of, but I knew he had a concussion. He was asking for me, and then when he saw me, I could just tell it wasn’t the same guy that I’m used to seeing.”

McDaniel went even further, saying if Tagovailoa had a head injury he would have been listed on the injury report with it prior to the game.

“For me, as long as I’m coaching here, I’m not going to fudge that whole situation. If there’s any sort of inclination that someone has a concussion, they go into concussion protocol and it’s very strict. People don’t vary or stray. We don’t mess with that. Never have. And as along as I’m the head coach, that will never be an issue that you guys will have to worry about it.”

Once again, many fans, including Chris Nowinski and several others in the world of medicine, were left stunned by McDaniel and the Dolphins’ decision-making.

Mike McDaniel said it's good Tua "doesn't have anything more serious than a #concussion."

I don't think this guy gets it. A concussion is a traumatic brain injury & posturing suggests brain stem injury. It's pretty high on the list of serious medical consequences of football. https://t.co/ZGF2LWERak

“Unreal! Should all be fired for allowing Tua on the field for 2 games with 2 concussions with 4 days apart! Will Miami be held accountable for this???” one fan tweeted.

‘Nothing but a serious concussion’? He has a traumatic brain injury….that describes it better. Proof the #NFL still doesn’t care about the seriousness of #concussion

“Not a lot of faith and confidence in that speech. McDaniel doesn’t even sound like he believes the words coming out of his mouth. Prayers for Tua’s full recovery,” wrote another fan.

I have serious concerns about ANOTHER concussion, this time with decorticate posturing.

As I mentioned previously, the main concern if returning from a concussion before symptoms resolve is Second Impact Syndrome.

Let’s hope not because that could be deadly. 🙏🏼 pic.twitter.com/amDKL9XiJL