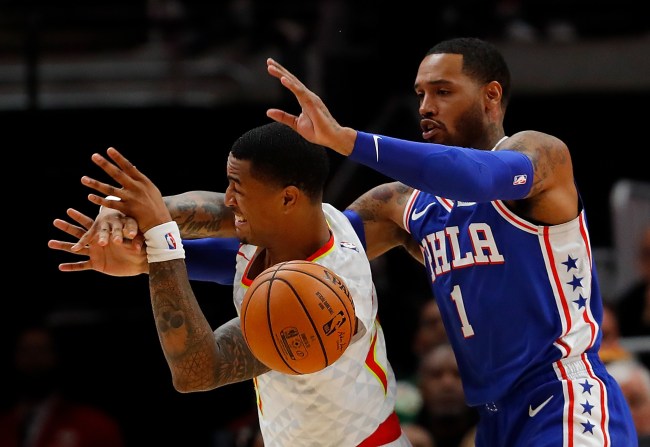 I really don’t want to be That Guy who kneels at my homemade shrine of Bill Lambieer every morning while softly saying to myself, ‘the NBA has gotten soft.’

But the refs in the Sixers/Hawks game on Monday night left me no choice, as they ejected Sixers forward Mike Scott with 1:36 left in the first half for what officials deemed a Flagrant 2 foul on the Hawks’ Damian Jones. As a refresher, a Flagrant 1 call is made when unnecessary contact is made and a Flagrant 2 is when the contact is unnecessary and excessive, resulting in an automatic ejection.

wildest ejection i've seen in a long time. this is a regular foul pic.twitter.com/LbIF3FteXK

Philly fans brought a coffin with Sean Taylor’s jersey over it and proceeded to fight Mike Scott (foward for the PHILADELPHIA Sixers). These fans are the scum of the earth. Philadelphia has the worst fan bases in all of sports #eagles #philly pic.twitter.com/OxsKL70c6s

The Sixers ended up squeezing out a 105-103 victory to remain unbeaten on the season, so Scott’s ejection wasn’t futile, but still. I can understand if we’re deep into the game and things are getting out of hand, but to toss someone in the second quarter over a foul I wouldn’t call in pickup is outlandish.

I’m glad I’m not the only one who thought so.

WHAT? A Flagrant-2?!?! Are you kidding me? C'mon now. No reason Mike Scott should have been ejected for that…

Mike Scott being ejected from this game is one of the most ridiculous things I've seen in an #nba game in a long while.

Early contender for worst call of the year

“Why did you give Mike Scott a flagrant 2 for that?”

First the headband now this bullshit flagrant? NBA has it out for Mike Scott

Ben Simmons getting pushed in the back while dunking here is worse than what Mike Scott got ejected for. https://t.co/0nR0oDrcgr

Mike Scott with common foul to stop the breakaway layup.

Ah, referees. Always getting blasted for their shortcomings. Poor bastards.