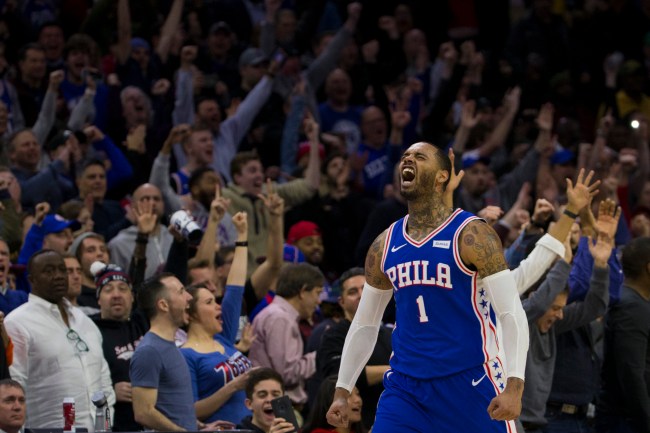 The Mike Scott vs. Philly fan saga continues and it’s only getting uglier.

The Sixers forward and Chesapeake, Virginia native was decked out in Redskins gear for Sunday’s Skins vs. Eagles game and engaged in a brawl with fans who would otherwise be cheering for him.

It was originally inaccurately reported that the genesis of the fight was due to Philly fans bringing a casket to the tailgate and draping the jersey of murdered Redskin legend Sean Taylor (it has since been debunked).

Kyle Neubeck, a Sixers beat writer for Philly Voice, did some actual investigative journalism to find the root of the fight, and it doesn’t paint a good picture for the otherwise squeaky clean reputation of Philly fans. That was a joke.

Though some fans in the area initially engaged in the sort of accepted hostility you expect between division rivals — “F*ck the Redskins!” and “F*ck you!” were among the insults directed his way — witnesses say tailgaters who escalated the situation directed racial slurs, specifically the n-word, in Scott’s direction in the area by the coffin.

The majority of witnesses who spoke to PhillyVoice painted it as the cause of the fight that was later captured on video, though a smaller group claimed not to have heard them until the shoving eventually broke out.

There was, however, universal agreement that slurs were used during the incident, and multiple eyewitnesses in the area at the time say they continued to hear racially insensitive language after the incident had been broken up and Scott had moved on to go about his day.

I absolutely doubt this happened in the fine city of Philadelphia…