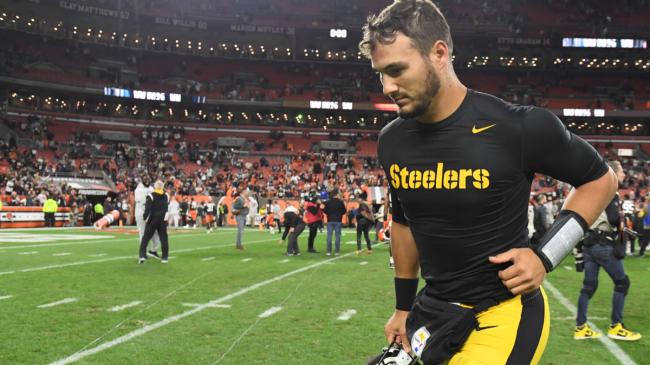 The Pittsburgh Steelers continue to struggle on offense in 2022. The unit has yet to score 20 points in a game, leading to a 1-2 start in the Steel City.

Pittsburgh won its season opener over the Bengals, 23-20, but seven of those points came from the defense. Despite forcing five turnovers, the Steelers had to go to overtime, mainly due to their inability to score.

In Week 2, the team scored 14 points in a loss to New England, and on Thursday night, they fell to the Browns, 29-17. Things looked better against Cleveland, especially in the first half, where Pittsburgh scored 14 points. Unfortunately, they were held out of the endzone in the second half of another deflating defeat.

Pittsburgh’s offensive numbers have been downright bad. The unit is averaging 15.6 points per game (without defensive scores) and 273 yards per game.

With that poor production, many have been critical of both new passer Mitch Trubisky and his play caller Matt Canada. Fans are already calling for the offensive coordinator to be fired and the starting quarterback to be replaced by rookie Kenny Pickett.

After the loss to the Browns, head coach Mike Tomlin weighed in on the outlooks for those two offensive pieces.

In the press conference following the loss to the Browns, Mike Tomlin commented on the criticism of both Mitch Trubisky and Matt Canada. While many around Pittsburgh want to see a change, it doesn’t appear that the team’s head coach is in any hurry to adjust the offense.

Here’s what Tomlin had to say when asked about making changes with Trubisky and Canada.

“I’m not in that mindset. The answer is definitely no.”

That might be unsettling news for many Steelers fans following a second straight loss. If the offense doesn’t get on the right track soon, Tomlin will be sure to hear more noise surrounding the unit.