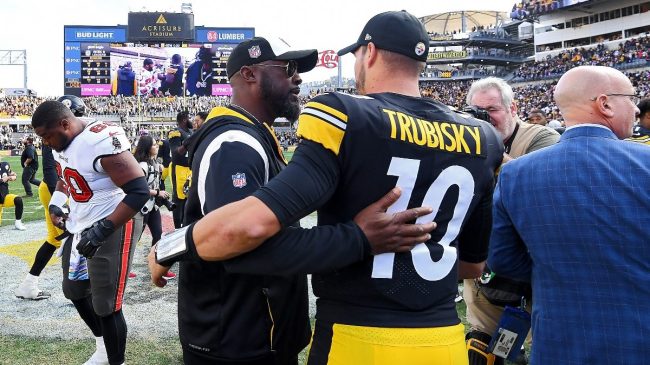 The Pittsburgh Steelers surprisingly took it to the Tampa Bay Buccaneers on Sunday after earning a wild win. It was a day of dramatics for this team, as Kenny Pickett, unfortunately, fell to injury. Mitch Trubisky proved himself in a wild comeback attempt, but in the process, we’ve learned the real reason why Mike Tomlin previously benched him.

According to the Pittsburgh Post-Gazette, “Trubisky was benched against the Jets following a locker room confrontation at halftime with receiver Diontae Johnson.” Apparently, the two got into a yelling match at half-time. The Steelers’ veteran quarterback “stood up to Johnson and a heated exchange occurred. That’s when Pickett was told he would start the second half.”

That’s a wild way to lose the starting job. However, Mike Tomlin likely felt he needed to switch things up, as his offense was clearly going to struggle with Mitch Trubisky under center after that confrontation.

Then, fast forward to Week 6 where Kenny Pickett receives a head injury. Trubisky entered the game and brought life to the offense we haven’t seen this season. Now, the veteran quarterback could have a second chance to prove himself.

That’s especially true considering Kenny Pickett is dealing with a concussion. There’s a real chance he won’t be available in Week 7. If that’s the case, then Mitchell Trubisky could prove to be the man for the job moving forward. However, that’ll be a decision for Mike Tomlin to make.