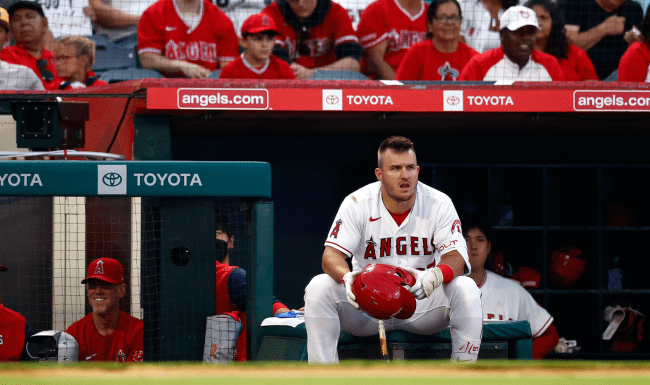 Mike Trout is one of the most patient players in Major League Baseball. And we’re not talking about his approach at the plate, though he is pretty good at practicing patience there.

He’s got to extremely patient because he has been arguably the best player in the game since bursting on to the scene in 2011 and has played on a team that has made the playoffs once, in 2014.

Even that didn’t go well. The Angels in their one and only postseason appearance since Mike Trout was a member of the team lost 3-0 in the American League Division Series to the Kansas City Royals.

Between him and Shohei Ohtani, they’ve won two Rookie of the Year Awards and four MVP Awards in those 10 seasons, yet the Angels haven’t finished about .500 since 2015.

The fact that he’s had to endure 10-plus years of team failure and hasn’t asked for a trade or complained incessantly about all the losing is actually pretty impressive.

However, after jumping out to an impressive 27-17 record to start the year, only to lose a franchise record 14 games in a row, the Angels now sit at 36-41, 12 games back, and Mike Trout appears to nearing the end of his rope.

Case in point: Tuesday night during another blowout loss, 11-4 to the Chicago White Sox, Mike Trout looked completely fed up when Elvis Peguero allowed four runs in two-thirds of an inning and Trout noticed that the Angels relief pitcher was telegraphing his pitches.

Listen as the Angels broadcast team explains how Trout knew that Peguero was tipping his pitches all the way from center field.

Angels broadcast broke down Peguero tipping pitches and followed it with the video of Trout mimicking him after spotting it in center field (h/t @AdamStites_) pic.twitter.com/mqF7GvUXAX

The look on Mike Trout’s face pretty much sums up the Angels’ season.

Making matters worse, Trout and Ohtani hit back to back home runs in the game and the Angels still had no shot at a win.

Fans, once again, felt very sorry for the man.

Weird to feel bad for him with his his bank looks vs. mine but damn....

This man is dead inside 😭 https://t.co/1MMOINAENA

10 years of franchise futility on his face.

As an angels fan, they should just trade Trout and Ohtani to a good team bruh. So sad that these guys have to deal with this sorry ass team and nothing ever changes