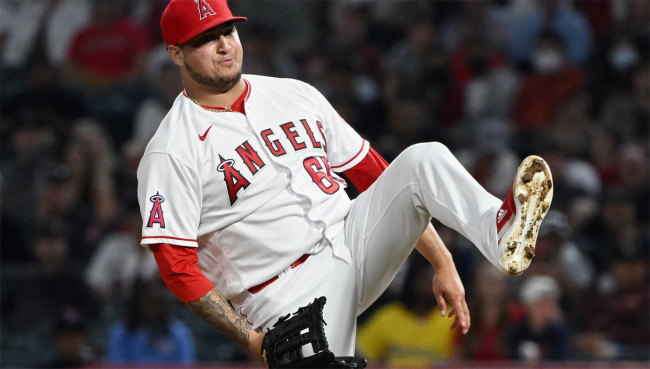 Just when you thought it couldn’t get any worse for the Los Angeles Angels, it does.

Fresh off their 13th straight loss – a franchise record – the Angels decided to try something new Wednesday night.

After firing their manager Joe Maddon on Tuesday, and losing their superstar outfielder Mike Trout to a groin injury that same night, Los Angeles made the unusual move of having all of their batters use Nickelback for their walk-up song.

They still lost to the Boston Red Sox by a score of 1 to 0.

“I like Nickelback,” new interim manager Phil Nevin said after the game. “The entire game, I got the songs in my head, I can’t stop singing, and the next guy comes up. … I don’t know who it was [who decided to use the Nickelback songs], but it was neat, for a while.”

“It definitely threw us off guard a little bit,” said starting pitcher Reid Detmers. “That’s just trying to keep us loose, have some fun.”

It also threw baseball fans off, more than a little bit.

The Angels turned to Nickelback walk-up songs to end their losing skid. The baseball gods struck back after their ears started bleeding. The streak is now at 14 losses in a row after a 1-0 loss to the Red Sox, with Mike Trout still sidelined and day-to-day with a groin injury.

The Angels are averaging 0.0 R/G when the team walks up to Nickelback. pic.twitter.com/byP6jdrfyV

The Jays broke this team so badly. https://t.co/XSdv3UIU92

Angels fans watching their team lost 14 in a row and having to listen to Nickelback for the past 3 hours pic.twitter.com/7mfodbEiAq

Here was the full playlist for the Angels’ batters Wednesday night.

Here it is, folks: Shohei Ohtani walking up to Nickelback’s “Photograph.” pic.twitter.com/DV1RHeOVUN

See the thing they haven’t thought of is: if they win and break their losing streak, they have to keep walking up to Nickelback forever https://t.co/7CHMGO16h9

So the 14th straight loss for the Angels was, in reality, a blessing!