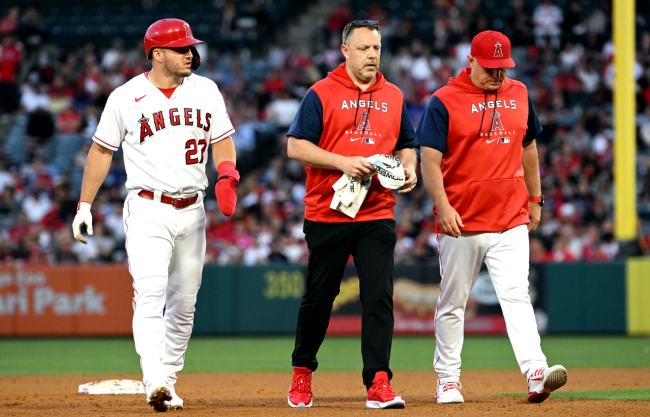 When it rains, it pours. At least that is the case in Los Angeles lately when it comes to the city’s Angels.

The Angels, with a total payroll this year of almost $190 million, were expected to be very competitive in 2022. And they were… for awhile.

On May 16, the Angels were 24-14 and had been in first place in the American League West since April 19 for all but one day.

That was the last time they won a game.

Tuesday night, after firing Joe Maddon, who was 130-149 since taking over the job in 2020, and naming Phil Nevin the interim manager, the Angels proceeded to go out and lose their 13th straight game.

The 10 inning, 6-5 loss to the Red Sox pushed the teams losing streak to franchise record levels for the Angels.

The Angels lost their 13th consecutive game tonight, a new single-season franchise record and tied with the 1985 Cubs for the longest skid by a team that was 10 games above .500 when the streak began.

Six of the Angels' 13 losses have come by a run, including the last two.

It’s not like Los Angeles didn’t have a chance to win. The Angels were actually up in the game 5-3 going into the sixth inning. That lead was in large part due to perennial All-Star Mike Trout hitting a two-run home run and a double in his first two at bats.

Then he got hurt.

After hitting that double in the third inning, Trout was removed from the game with what the Angels are calling left groin tightness.

Mike Trout was removed from the game after his 3rd inning double. There looked to be some discomfort on his way to first base. pic.twitter.com/RpctAFqAwX

Following the game, Trout said his groin injury was “nothing crazy” and will see how he feels when he wakes up Wednesday before deciding how to proceed next.

The Angels now sit at 27-30, 9-1/2 games out of first place in the AL West, and have baseball fans feeling sympathetic… kind of.

13 L’s in a row, manager fired, trout possibly hurt. check on your angels fans friends, they are DOWN

13 straight losses for the Angels. Coach got fired 2 months into the year. Ohtani is literally an MVP and Mike Trout is one of the greatest of our generation, yet they constantly find themselves in lost seasons. Get these guys out of that cesspool of a franchise

Today I bet money I don’t even have. I spent all of last night begging on the streets for money. You guys continue to fail me 13 games and my life is forever ruined. Mike trout is hurt, ohtani is destined to leave and my life is over. Goodbye Angels

This team is soft.

GIVE IT UP FOR LOSS 13 EVERYBODY pic.twitter.com/y7DufrSo6k