Les Miles’ ESPN+ Show, ‘Miles To Go’, Shows Off All The Quirkiness Of The Kansas Jayhawks’ Head Football Coach 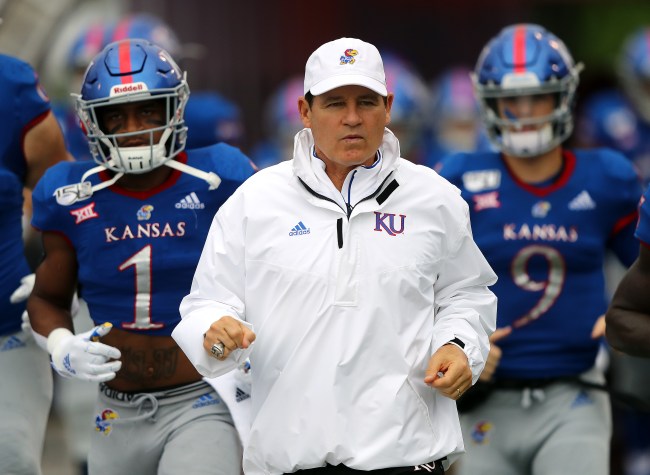 Les Miles is one of the quirkiest and most interesting college football head coaches on the planet, and, thanks to ESPN+, viewers can go behind-the-scenes to see how the Kansas Jayhawks coach is looking to turnaround the program with the in-depth show called Miles to Go.

With 15 episodes all available on ESPN+ already, the most recent release — coming today, November 21 — shows how Les Miles challenges his team to dig deeper following a disappointing road loss. It’s one of those moments that’s sure to show what being a head coach in college football is all about, with Miles acting as a leader, a father-figure, a mentor and a hype man all at once.

Les Miles has developed a cult following thanks to his strange routines — which includes his well-documented one of eating grass — college football fans will be more than entertained with Miles to Go and all that it has to offer. Plus, with live college football games all season and in-depth analysis about all things college football, ESPN+ really hooks up both diehard and casual fans for only $4.99 a month!

With ESPN+ airing new episodes of Miles to Go each Thursday — with the 18-part series running all college football season long — fans can see what it takes to build a program. Earlier episodes detailed thing like fundraising, contract negotiations, building the coaching staff, preparing the players and more, while cameras capture the intensity and emotion of being a student-athlete at Kansas.

And, remember, all episodes of Miles to Go are available exclusively on ESPN+, so you can binge-watch the whole series to catch up before the final episodes air.

In addition to Les Miles’ show, Miles to Go, ESPN+ subscribers get access to loads of other sports content, too. And, as the exclusive home for the UFC, fans will have plenty of had-hitting action and classic fights to choose from. Here’s some of what to expect with an ESPN subscription, which, remember, costs just $4.99/month or $49.99/year.

Whether you’re taking in all the unique intricacies of Les Miles by watching Miles to Go, or trying to get the most extensive sports content at all times, ESPN+ is your go-to spot. Plus, here’s a friendly reminder that ESPN+ is only $4.99/month, meaning you can get all the content you want from the sport without committing too much.

With all the sports content a fanatic could ask for, ESPN+ is the premier destination to get in on all the action. Whether it’s Peyton Manning’s Peyton’s Places, Alex Morgan’s The Equalizer, exclusive UFC content, live sporting events or more, no streaming service has it like ESPN+ has it.