The Milwaukee Bucks Are Planning The NBA’s Coolest Giveaway Tonight 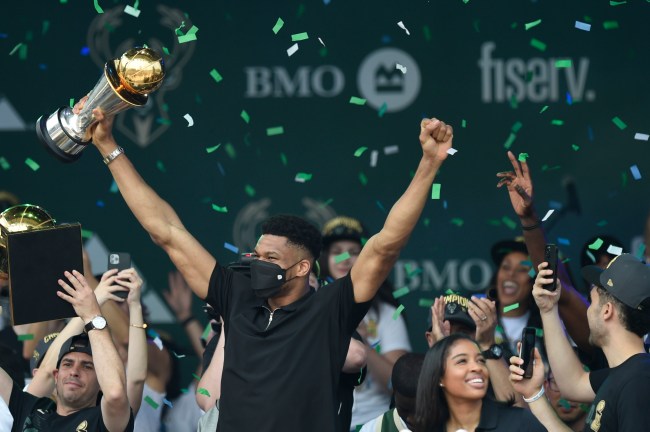 Teams across sports have been planning giveaway nights for decades. The items fans have gotten in the past for their dedication have ranged from t-shirts to bobble heads to trading cards, but now the Milwaukee Bucks are taking the giveaway game to a whole new level.

Tonight, the first 10000 fans to show up to to the Bucks matchup with the Orlando Magic will receive a piece of the Bucks’ championship floor from last season. The defending champs should generate a lot of fanfare with this offering.

The first 10,000 fans at tonight’s Milwaukee Bucks game will receive a piece of the 2021 Championship court 🏆

The giveaway is a part of larger initiative from the Bucks to repurpose that championship floor. The Bucks may also be hoping this giveaway will help distract from their performances so far this season.

Early on in the season, the Bucks haven’t had quite the same level of success as we saw from them en route to the NBA title last year. So far this year, they are 8-8, but tonight is a great chance to help fans forget about their struggles.

They draw the lowly Magic, who currently sit at 4-12, in a matchup that should have the fans who come to claim their pieces of court riding high throughout the night.

This giveaway is a great way to give back to the fanbase that supported this team throughout that title run and should keep fans happy as the Bucks work their way back into form now that Khris Middleton is healthy again.