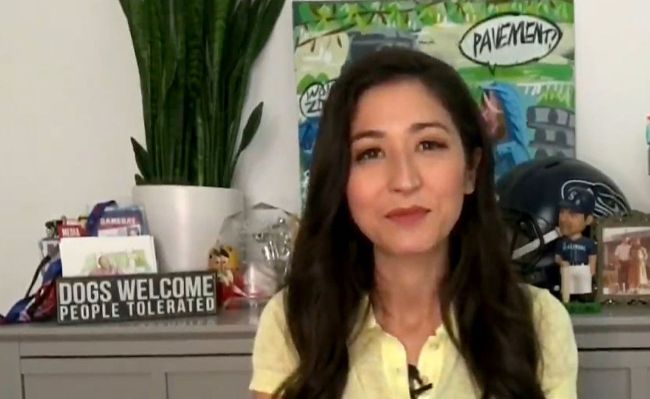 ESPN has various personalities, ranging from the performative to the legitimately informative to everything in between. It’s certainly no secret that, despite the network being based on “sports news”, ESPN is in the entertainment business, which is why the increasingly bombastic yet endlessly hardworking Stephen A. Smith is their highest-paid talent, signing a five-year, $60 million contract extension in late 2019.

On the other end of the spectrum are the likes of Mina Kimes, who — instead of using their voice to make their point — uses their pure intelligence to opine and inform the audience. I’ve tweeted about it before and I’ll say it again, I think Kimes’ is the network’s best NFL analyst (I also occasionally enjoy Dan Orlovsky) because instead of feeling like I’m having knowledge yelled at me in a performance art piece, I feel like I’m actually learning something as if I were in a classroom, as she’s able to bring well-researched, relatively complex football analysis and deliver it an understandable, but perhaps more importantly, consumable manner. As a result, Kimes is one of the only ESPN analysts I follow on Twitter.

Despite all that (word count oriented — hey Google, how are ya?) pontificating, this article actually isn’t about Mina Kimes, but her mother Sun Min Kimes, who I recently discovered has one of the most wholesome feeds on the entire cursed bird app known as Twitter.

A self-described “Korean mom into English football, American football, coffee, movies, dogs, etc.,”, her tweets consist of, well, *exactly* that. Kimes’ feed is an endless stream of tweets about Tottenham Hotspur, the USMNT, Seattle Seahawks, her dog Winston, and, of course, supportive and proud tweets about her ESPN star daughter. It’s the type of wholesome that only a mother could bring to the otherwise largely toxic social media platform. Moms, man — just the absolute best. If anyone can clean up Twitter, it’s them.

don’t be too cute pic.twitter.com/l0QFF7nUFC

just about 30 minutes to the WCQ CONCACAF game at 6 pm (ET) between USA and Panama. had an early dinner and watching NFL red zone now. gonna switch to USA Panama game soon.
can we see Pepi magic again?

woo hoo Younghoe Koo – you are our pride along with Heung Min Son pic.twitter.com/cePxlAERbY

again this morning Winston wanted to go to friends’house,so I decided to take him instead of pulling him in a different direction for him to accept the truth
me:”honey, I told you they moved away, so forget about them”
Winston”maybe humans can, but not us”
me:”…..”

Mina is on Pardon the Interruption with Frank Isola today and Mr. Isola calls her “Madam Football” – I think I like it

“and don’t let Stephen A. wakes me up”

last night when I was walking my dog, this gigantic toad was looking directly at me and said “good luck with your games tomorrow!” pic.twitter.com/ycap3IQOnG

“hey Winston, you watch too much tv”
“mom, because Mina is on”
“ok, go on” pic.twitter.com/nCVGuL1izH