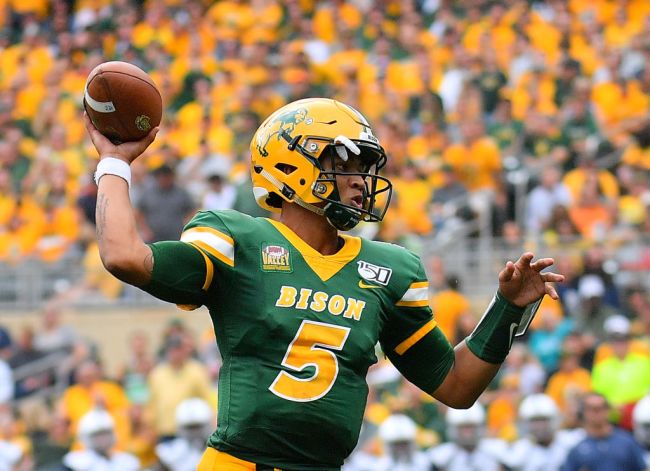 The general consensus heading into the 2021 NFL Draft is that Trevor Lawrence, Justin Fields, Zach Wilson and Trey Lance are the top four quarterback prospects in this year’s class. Clemson’s former gunslinger is headed to Jacksonville, and Fields and Wilson appear to be going to either New York (Jets) or San Francisco. That leaves the former North Dakota State Bison duel-threat quarterback as the odd man out by most accounts.

ESPN’s Mel Kiper Jr. released his most recent mock draft 4.0 and has the Atlanta Falcons trading back from No. 4 to No. 6 and selecting Lance in the top 10. The move actually makes a lot of sense for a team that Matt Ryan under contract for this season, considering how Lance could benefit from a year (or more) of growth behind one of the league’s top veterans.

Mina Kimes agrees that Lance could fit well with the Dirty Birds and went so far as to say that he has the highest ceiling of any quarterback in the draft.

I think Trey Lance has the highest ceiling of any QB in the draft 🥱 pic.twitter.com/wrDtCNdEfo

It might be on the spicier end of the “hot take” realm, but she might be onto something here. On the literal sense, he has nowhere to go but up. Lance has played only one full season as the starter on the collegiate level and has a lot of mystery surrounding his raw athleticism and rocket arm. He’s considered a project and beauty is in the eye of the beholder. With that being said, Mac Jones started the same number of games at Alabama and there’s a lot of beauty to behold.

As a redshirt freshman, Lance completed 66.9 percent of his passes for 2,786 yards and 28 touchdowns and added 1,100 yards and 14 touchdowns on the ground. His eye-popping numbers led him to be named the Walter Payton Award winner (FCS football’s Heisman Trophy) and saw him become the MVP of the FCS National Championship Game.

The 2020 season was supposed to be Lance’s opportunity to make a case for being the second quarterback off of the board until COVID-19 changed those plans and pushed 5 of the team’s six games to 2021. Lance chose to opt-out of the spring season, which left him with a one-game showcase in the fall. He completed only 50% of his passes for two touchdowns in a win over Central Arkansas, but he scampered for a game-high 143 yards on 15 carries and scored twice with his legs.

While his accuracy and reads struggled in the game, those are very coachable parts things for an NFL franchise and it’s hard to replicate his rocket arm. Lance put together a stellar Pro Day in March and his athleticism is hard to match at 6-foot-3, 226 pounds.

Trey Lance has a HOSE for an arm 🎯pic.twitter.com/IuYi3kHXyl

There is a lot to learn for the 20-year-old and whoever drafts him at the end of the month should be prepared to be patient and work through some of the growing pains. But as Kimes says, if his skillset that he showed in Fargo can translate to the next level, he could sneakily become the best quarterback in the class and be a threat for years to come.