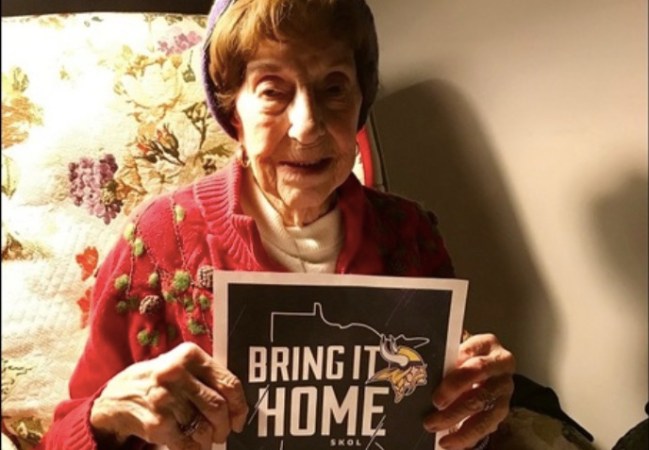 Sundays for Minneapolis resident and old person Millie Wall consist of sucking down screwdrivers and watching Vikings games from her living room. This has been a weekly ritual since the inception of the team dating back to 1961.

The 99-year-old super fan has attended a handful of Vikings games attended  at the Metrodome and the old Met Stadium, and has even made a Lambeau Field road trip. Historically, she has grown accustomed to throwing a foam brick at the TV during the game in frustration.

“It’s funny, she actually tied a string to it because she got tired of going to retrieve it,” Millie’s granddaughter Ashley told Vikings.com. “But even through the ups and downs, she’s been a fan through it all.”

I guess making it to four Super Bowls in the 70s and losing all four will harden you a bit.

Now, with the Vikings securing the second-highest win total in franchise history at 13, the elusive Super Bowl victory isn’t a long shot for Millie and the Vikings. The organization has recognized Millie’s unwavering support and in conjunction with her 100th birthday, the team invited her to her first ever playoff game next week against the News Orleans Saints.

The unveiling was magical:

You're never too old to attend your first #Vikings playoff game.

We can't wait for you to help us #BringItHome for your 100th birthday, Millie! pic.twitter.com/fAPO3FOFsg

“You’ve gotta be kidding,” Millie said in disbelief, to a group of 30 people who came to watch.

Her granddaughter, Ashley, added: “This really is a dream come true for her to attend her first playoff game.”

I didn’t have a dog in the Vikings/Saints fight, but now I can’t root against a sweet old lady at her first ever playoff game. I’m a lot of things, but not a goddamn monster.