Wild Goalie Cam Talbot Committed Highway Robbery With Back-To-Back Saves That Could Both Be No. 1 On SportsCenter 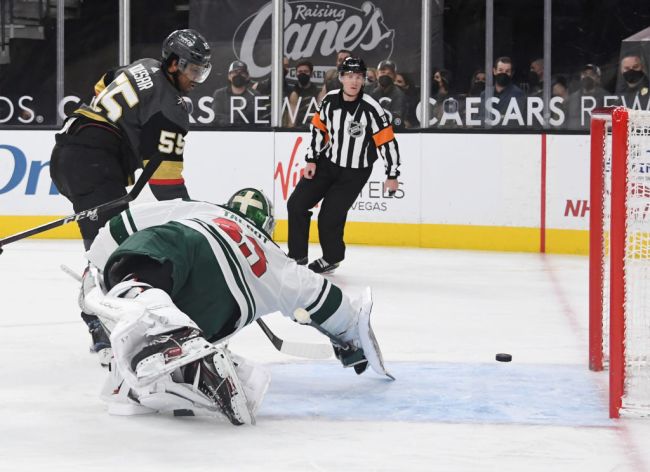 Cam Talbot was simply outstanding with his performance on Thursday night. Minnesota’s goalie saved 35-of-37 shots in a shootout road win over Vegas and made a few incredibly impressive saves late in the game. With just over 10 minutes left in the second period, Keegan Kolesar received a saucer from Reilly Smith that looked promising. Talbot slid over and stretched out to snag it in his glove, which only made Kolesar smile.

Not moments later, Kolesar broke free in the zone to try and redeem himself. Having to get back across his body, Talbot laid all of the way out and kept the puck out with his stick. He got just enough on it to push Vegas’ second attempt past the post and out harm’s way.

Are you serious, Cam Talbot? pic.twitter.com/hnoNNQbChN

Vegas continued to pepper the net, but Talbot locked it down by putting his body in front of everything that came his way. The damage would have been a lot worse with out the Wild netminder and the game went to a shootout in a 2-2 deadlock.

Talbot’s tremendous evening continued into the shootout and he kept every attempt out, giving Minnesota the win 1-0, 3-2 (SO).

He spoke on the win after recording a .946% save percentage.

Hear from the @mnwild goaltender. pic.twitter.com/xxDPw2fnf2

The 33-year-old went undrafted out of the University of Alabama Huntsville but signed with the Rangers as a free agent in 2010. Talbot backed up Hendrick Lundqvist until 2015 when he was thrust into the starting lineup after Hank suffered an injury. Since then, the Canadian tendie has played with the Oilers, Flyers, Flames and now the Wild. When you’re on, you’re on, and Talbot was on on Wednesday.